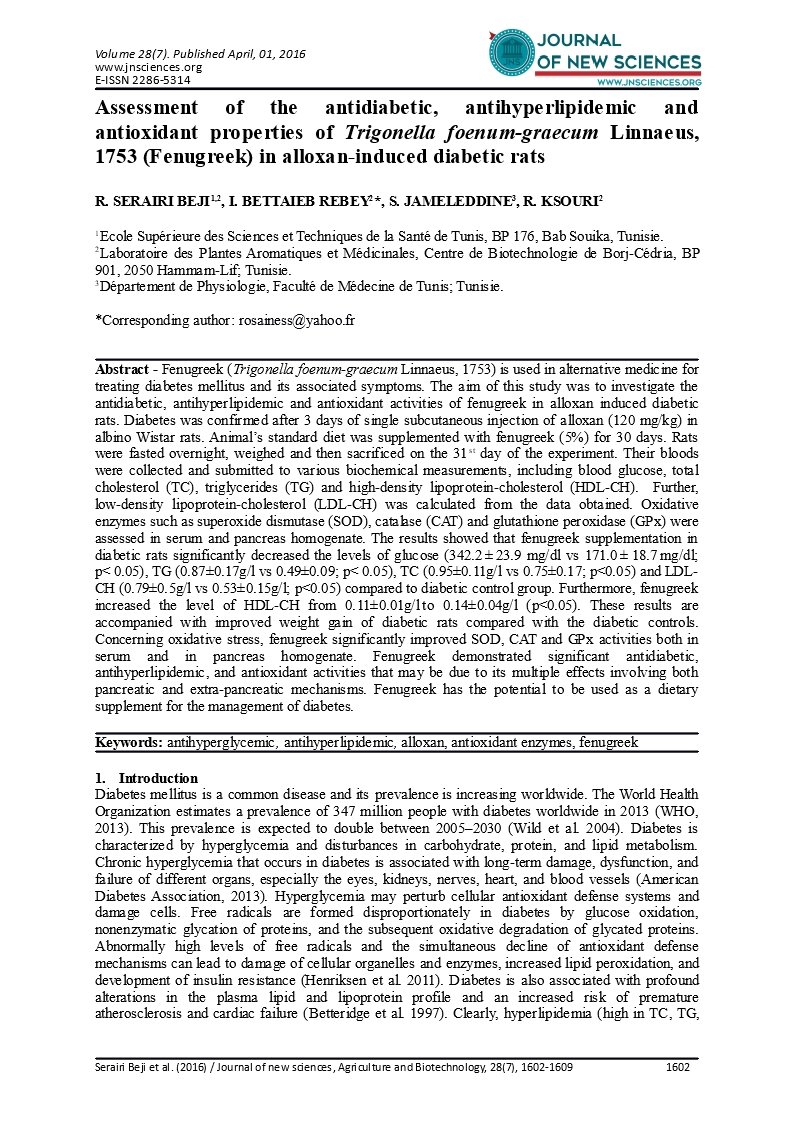 Abstract - Fenugreek (Trigonella foenum-graecum Linnaeus, 1753) is used in alternative medicine for treating diabetes mellitus and its associated symptoms. The aim of this study was to investigate the antidiabetic, antihyperlipidemic and antioxidant activities of fenugreek in alloxan induced diabetic rats. Diabetes was confirmed after 3 days of single subcutaneous injection of alloxan (120 mg/kg) in albino Wistar rats. Animal’s standard diet was supplemented with fenugreek (5%) for 30 days. Rats were fasted overnight, weighed and then sacrificed on the 31st day of the experiment. Their bloods were collected and submitted to various biochemical measurements, including blood glucose, total cholesterol (TC), triglycerides (TG) and high-density lipoprotein-cholesterol (HDL-CH). Further, low-density lipoprotein-cholesterol (LDL-CH) was calculated from the data obtained. Oxidative enzymes such as superoxide dismutase (SOD), catalase (CAT) and glutathione peroxidase (GPx) were assessed in serum and pancreas homogenate. The results showed that fenugreek supplementation in diabetic rats significantly decreased the levels of glucose (342.2 ± 23.9 mg/dl vs 171.0 ± 18.7 mg/dl; p< 0.05), TG (0.87±0.17g/l vs 0.49±0.09; p< 0.05), TC (0.95±0.11g/l vs 0.75±0.17; p<0.05) and LDL-CH (0.79±0.5g/l vs 0.53±0.15g/l; p<0.05) compared to diabetic control group. Furthermore, fenugreek increased the level of HDL-CH from 0.11±0.01g/l to 0.14±0.04g/l (p<0.05). These results are accompanied with improved weight gain of diabetic rats compared with the diabetic controls. Concerning oxidative stress, fenugreek significantly improved SOD, CAT and GPx activities both in serum and in pancreas homogenate. Fenugreek demonstrated significant antidiabetic, antihyperlipidemic, and antioxidant activities that may be due to its multiple effects involving both pancreatic and extra-pancreatic mechanisms. Fenugreek has the potential to be used as a dietary supplement for the management of diabetes.

Due to numerous injuries and occasionally fatal disease caused in diabetic patients, there is a need to find the treatment methods and ways to reduce and prevent it. Presently, with regard to the problems of preparing and injecting insulin and other glucose-lowering drugs and also considering the side effects of synthetic drugs, the use of herbal medicines has attracted the attention of researchers. Fenugreek (Trigonella foenum-graecum Linnaeus, 1753) is used as a condiment, as a supplement to ‘’bsissa’’, a local diet preparation largely consumed in Tunisia and as a constituent of the daily diet in several African countries.

Since non processed herbs are usually more tolerated than extracted or formulated products and patients prefer to consume plants as salad, spice, and so forth, in this work, we aimed to investigate the effect of fenugreek powder supplemented to rat diet on glycemic, lipidemic and antioxidant status of diabetic rats.

Thirty-two male Wistar albino rats weighing 200-230 g and averaging 12 weeks old were obtained from Pasteur Institute of Tunisia and used in this study. They were housed in polypropylene rat cages in an animal room with controlled lighting (12 h light/12 h darkness) and temperature (22 ± 2∘C). The animals were given standard pellets diet and water ad libitum. All the animal experiments were performed according to the recommendations of ethic committee of Tunis University for care and International Council of Laboratory Animal Science. Induction of diabetes was carried out in rats by administering a subcutaneous injection of 120 mg/kg of freshly prepared alloxan solution (alloxan monohydrate, Sigma Chemicals Co.), dissolved in acetate buffer (pH 5.5) prepared immediately before use. The control groups were injected only with the same volume of acetate buffer as the diabetic groups received. Alloxan induces diabetes through destructing Langerhans islands of the pancreas. Therefore, a large amount of insulin is released from the pancreas cells after the injection. In order to prevent hypoglycemic shock, during the first 24 h after the alloxan injection, the rats received 10% dextrose instead of water (Shahidi et al. 2001; Kwon et al. 2003). Induction of diabetes was confirmed by measuring fasting blood glucose (FBG) three days after alloxan injection. Rats with blood glucose level of 250mg/kg or higher were considered to be diabetic (Ghorbani et al. 2013).

The experiment was carried out on four groups; each group contained 8 rats as follows:

The treatment was initiated two days after alloxan injection and continued for 4 weeks. At the end of the study, animals were fasted overnight and anesthetized with chloroform. Blood samples were collected from the animal's heart and the serum was separated by centrifugation (3000 rpm at 40 °C for 15 min) and stored at -30 °C for different biochemical analyses.

The body weights in experimental animals were determined before the study and at 7, 14, 21 and 28 days after the study by a digital balance (Entris®, precision 10mg). These weights were determined at the same time during the morning.

Throughout the 4-week treatment period, fasting (12 hours) blood glucose was measured before the study and at 7, 14, 21 and 28 days after the study on lateral tail vein. Blood samples were analyzed using an ACCU-Check glucose meter (Roche, Mannheim, Germany).

Lipid in serum concentration including TG, TC and HDL-CH were determined with the use of commercially available enzymatic kits from Biomaghreb Analyticals (Tunisia). LDL-CH was estimated by Friedwald method as follows:

All assessment assays and kits were performed in accordance with the manufacturer instructions and protocols.

Rats administrated fenugreek did not develop any clinical signs of toxicity either immediately or during treatment and no mortality occurred.

This beneficial effect on glycemic status is expected to happen as it has been confirmed with repeated studies (Sajad Arshadi et al, 2015; Gaddam et al. 2015). Antihyperglycemic effect of medicinal plants is achieved by different mechanisms including decreasing glucose absorption from intestine, enhancing insulin secretion from beta cells, increasing glucose uptake by tissues, inhibiting glucose production in liver, and increasing pancreatic tissue regeneration and/or presence of insulin-like agents in plants (Hui et al, 2009; Shanmugasundaram et al. 1981). The antihyperglycemic effect of fenugreek has been hypothesized to be due to the aminoacid 4-hydroxyisoleucine which acts by the enhancement of insulin sensitivity and glucose uptake in peripheral tissues (Singh et al. 2010). Other components of Fenugreek seeds are known to have hypoglycemic effects include arginine, tryptophan, ascorbic acid, niacin, nicotinic acid, chromium, copper, magnesium, manganese, zinc, gentianine, choline and quercetin (Thakran et al. 2004).

Diabetes is often associated with dyslipidemia, a main risk factor of cardiovascular diseases. Therefore, the levels of serum triglyceride and cholesterol are usually elevated in diabetic patients (Patel et al. 2008)

Here, we investigated the effect of a diet containing 5% fenugreek on lipidemic status of diabetic rats. Table 2 shows the level of serum lipids in study groups. In addition to reducing blood glucose, an insulin-mimetic agent should be able to normalize dyslipidemia. There was a significant elevation in the level of TG (0,87±0,17 g/l versus 0,45±0,07 g/l, ?< 0.05) and TC (0,95±0,11 g/l versus 0,60±0,07g/l, ?< 0.05) in diabetic control rats as compared with normal group. Our results showed that fenugreek powder supplemented to rat diet extract at dose of 5 % was able to cause a significant decrease in TG and TC levels in animal serum. The levels of TG and TC in fenugreek treated group were 0,49±0,09 g/l versus 0.40±0.11g/l in diabetic control group and 0,75±0,17g/l versus 0.63± 0.09 g/l in diabetic control group, respectively. The hyperlipidemia observed in the untreated diabetic rats in the present study could indicate an increase in the mobilization of free fatty acids from the peripheral fat depots. This could result from the uninhibited actions of lipolytic enzyme lipase caused by insulin deficiency characteristic of the diabetic state (Omolola et al. 2014). The increased levels of CH and TG were brought back to near normal by the treatment with fenugreek. This observed restoration of the alloxan evoked changes in the serum lipid profile shows the protective nature of fenugreek. Nevertheless, the lipid-lowering compounds in fenugreek seeds could be of a polyphenolic nature. Indeed, Wilox et al. (2001) provided evidence that naringenin not only decrease cholesterol biosynthesis but also inhibit acyl transferase (ACAT), a key enzyme involved in the esterification and absorption of cholesterol, secretion of hepatic LDL-CH, and cholesterol accumulation in the arterial wall. Naringenin is in fact a well known flavonoid which was detected in fenugreek extract (Belaid-Nouira et al. 2012). Others compounds were also detected like 4-hydroxyisoleucine, an atypical branched-chain amino acid derived from fenugreek (Jetté et al. 2000) also detected in fenugreek (Belaid-Nouira et al. 2012). This effect could explain the significant increase in plasmatic HDL-CH following TC decrease when fenugreek seeds are administrated to alloxan-treated rats.

The common chronic damage in diabetes patients is closely related to elevated oxidative/inflammatory activities with a continuum of tissue insults leading to more severe cardiometabolic and interrelated complications (Ndisang et al. 2010). In the present study, we also investigated the antioxidant effects of fenugreek in plasma and homogenate pancreas of alloxan-induced diabetic rats. To our knowledge, no studies compared oxidative enzymes activities in plasma and tissues. Our results show that untreated diabetic rats showed significantly reduced SOD (p<0.05), GPx (p < 0.05) and CAT (p < 0.05) activities in plasma and pancreas homogenate, compared to the non-diabetic control group. The enriched diet with fenugreek for four weeks produced significant increases in SOD (p < 0.05), CAT (p < 0.05) and GPx (p < 0.05) activities both in plasma and in pancreas homogenate.

The oxidative stress induced by alloxan arises due to a compromise in natural antioxidant mechanism and an increase in oxygen free radical production (El-Demerdash et al. 2005). Indeed, free radical scavenging enzymes such as SOD and CAT protect the biological system from oxidative stress (Del Rio et al. 2005). SOD catalyses the reaction in which superoxide anion is converted to hydrogen peroxide and oxygen while CAT is a haem-containing ubiquities enzyme that detoxifies H2O2 into water and oxygen (Selvan et al. 2008). The reductions observed in the activities of SOD and CAT in the diabetic control group suggest their excessive utilization in attenuating free radicals generated during the metabolism of alloxan. This observation has already been reported in diabetic animals (Onyeka et al. 2013). Increase in their activities is an indication of their ability to scavenge ROS, thus contributing to the protective effect against oxidative stress and preventing further damage to membrane lipids.

In conclusion, the present study demonstrated that the hypoglycemic and antihyperlipidemic activities exhibited by fenugreek were effective enough to alleviate alloxan-induced diabetes in experimental rats. The beneficial effect of diet supplemented with fenugreek is presumably attributed to its potent hypoglycemic and antihyperlipidemic properties, as well as antioxidant potential. Further studies using different doses and for different periods are obviously needed to determine the dose required on the protective effects of fenugreek in humans and to make its use suitable as an effective functional food with therapeutic potential.