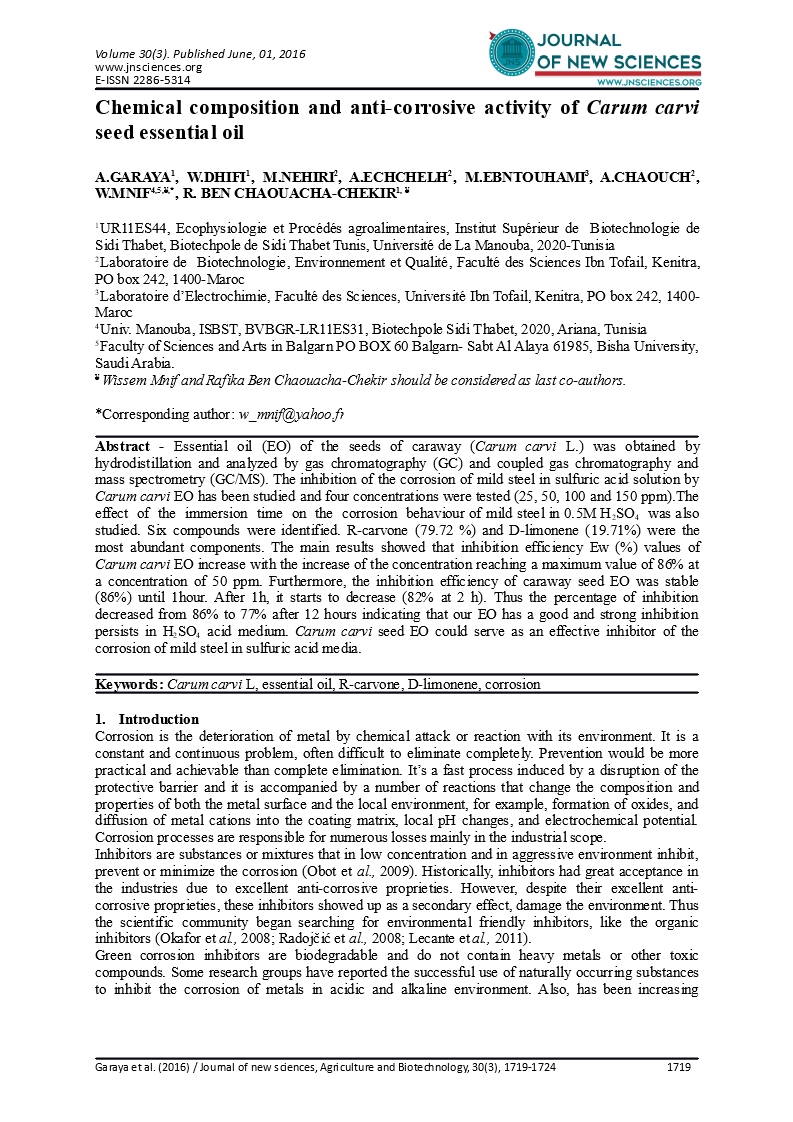 Abstract - Essential oil (EO) of the seeds of caraway (Carum carvi L.) was obtained by hydrodistillation and analyzed by gas chromatography (GC) and coupled gas chromatography and mass spectrometry (GC/MS). The inhibition of the corrosion of mild steel in sulfuric acid solution by Carum carvi EO has been studied and four concentrations were tested (25, 50, 100 and 150 ppm).The effect of the immersion time on the corrosion behaviour of mild steel in 0.5M H2SO4 was also studied. Six compounds were identified. R-carvone (79.72 %) and D-limonene (19.71%) were the most abundant components. The main results showed that inhibition efficiency Ew (%) values of Carum carvi EO increase with the increase of the concentration reaching a maximum value of 86% at a concentration of 50 ppm. Furthermore, the inhibition efficiency of caraway seed EO was stable (86%) until 1hour. After 1h, it starts to decrease (82% at 2 h). Thus the percentage of inhibition decreased from 86% to 77% after 12 hours indicating that our EO has a good and strong inhibition persists in H2SO4 acid medium. Carum carvi seed EO could serve as an effective inhibitor of the corrosion of mild steel in sulfuric acid media.

Corrosion is the deterioration of metal by chemical attack or reaction with its environment. It is a constant and continuous problem, often difficult to eliminate completely. Prevention would be more practical and achievable than complete elimination. It’s a fast process induced by a disruption of the protective barrier and it is accompanied by a number of reactions that change the composition and properties of both the metal surface and the local environment, for example, formation of oxides, and diffusion of metal cations into the coating matrix, local pH changes, and electrochemical potential. Corrosion processes are responsible for numerous losses mainly in the industrial scope.

Green corrosion inhibitors are biodegradable and do not contain heavy metals or other toxic compounds. Some research groups have reported the successful use of naturally occurring substances to inhibit the corrosion of metals in acidic and alkaline environment. Also, has been increasing research in natural products, such as plant extracts, essential oils and purified compounds to obtain environmental friendly corrosion inhibitors (Znini et al., 2001).

The aim of this study was to ascertain the chemical composition of caraway (Carum carvi) seed EO and its inhibitory effect against the corrosion of mild steel in 0.5M H2SO4 using weight loss measurements.

The seeds of carum carvi were purchased in April 2013 from Elhaouaria, in the region of Cap-Bon (North East of Tunisia). Voucher specimens were deposited in the herbarium of biology unit, Faculty of Sciences and Technology of Tunis (Tunisia).

EO was analyzed by gas chromatography (GC) using a Hewlett-Packard 6890 apparatus (Agilent Technologies, Palo Alto, CA, USA) equipped with a flame ionization detector (FID) and an electronic pressure control (EPC) injector. A HP-Innowax capillary column (polyethylene glycol: 30 m x 0.25 mm i.d, 0.25 μm film Hewlett-Packard, CA, USA) was used; the flow of the carrier gas (N2, U) was 1.6 ml/min and the split ratio 60: 1. Analyses were performed using the following temperature program: oven temps isotherm at 35°C for 10 min, from 35 to 205°C at the rate of 3°C/min, and isotherm at 205°C over 10 min. Injector and detector temperature were held, respectively, at 250 and 300°C.

GC-MS analysis of EO volatile components were carried out on a gas chromatograph HP 6890 (II) coupled to a HP 5972 mass spectrometer (Agilent Technologies, Palo Alto, CA, USA) with electron impact ionization (70 eV). A HP-5MS capillary column (30 m x 0.25 mm, 0.25 μm film thickness; Agilent Technologies, Hewlett–Packard, CA, USA) was used. The column temperature was programmed to rise from 35°C to 250°C at a rate of 5°C/min. The carrier gas was helium with a flow rate of 0.9 ml/min; split ratio was 60:1. Scan time and mass range were 1 s and 40-300 m/z, respectively. The injected volume was 1μl and the total run time was approximately 45 min. Identification of EO volatile compounds was based on the calculation of their retention indices (RI) relative to (C8-C22) n alkanes with those of authentic compounds available in our laboratory.

The aggressive solution (0.5M H2SO4) was prepared by dilution of analytical grade (AR) 98% H2SO4 with double-distilled water. Prior to all measurements, the mild steel samples (0.09% P; 0.38% Si; 0.01% Al; 0.05% Mn; 0.21% C; 0.05% S and the remainder iron) were polished with different emery paper up to 1200 grade, washed thoroughly with double-distilled water, degreased with AR ethanol, acetone and drying at room temperature. Gravimetric measurements were carried out in a double walled glass cell equipped with a thermostat-cooling condenser. The solution volume was 100 mL with and without the addition of different concentrations of inhibitor ranging from 50 ppm to 150 ppm. The mild steel specimens used had a rectangular form (2 cm x 2 cm x 0.05 cm). The immersion time for the weight loss was 12 h at 298 K. After the corrosion test, the specimens of steel were carefully washed in double-distilled water, dried and then weighed. The rinse removed loose segments of the film of the corroded samples. Duplicate experiments were performed in each case and the mean value of the weight loss is reported. Weight loss allowed us to calculate the mean corrosion rate as expressed in mg.cm-2 h-1. The immersion time effect was studied in intervals of 2 to 8 h in the presence of inhibitor at 298 K.

Our EO was obtained in a yield of 1.02% w/w base on dry weight. Six components were identified, representing 99.96% of the oil. The chemical composition of Carum carvi EO is given in Table 1.

This result is confirmed by the figure 2 relative to the stationary curve which showed that the percentage of inhibition is 91% for the concentration of 50 ppm while the other concentrations remained in the range of 66-75%.

Figure 3 illustrates the effect of immersion time on inhibition efficiency. It is obvious that inhibition efficiency of caraway seed EO was stable (86%) until one hour. After 1h, it starts to decrease (82% at 2 h). Thus the percentage of inhibition decreased from 86% to 77% after 12 hours indicating that our EO has a good and strong inhibition persists in HCl acid medium.

The increase in inhibition efficiency reflects the strong adsorption of constituents present in the EO on the mild steel surface, resulting in a more protective layer formed at mild steel/sulfuric acid solution interface. Furthermore, with time it seems the inhibiting effect decreases probably because some defects exist on the film leading to the access of aggressive anions to the steel/inhibitor interface. The decrease of the inhibition efficiency was attributed to the formation of hemimicelles aggregates by the initially deposited inhibitor molecules, reducing the effective area covered by the inhibitor (Mu et al., 2001). The inhibition efficiency increases with EO concentrations suggesting that the probable mechanism could be explained on the basis of adsorption process and the structure of the EO components. The inhibition may be due to the adsorption of phytochemicals of the oil by one and/or more of the following two modes: In one mode, the neutral molecules may be adsorbed on the surface of mild steel through the chemisorption mechanism, involving the displacement of water molecules from the mild steel surface and the sharing electrons between the oxygen atoms and iron. The inhibitor molecules can also adsorb on the mild steel surface on the basis of donor–acceptor interactions between π-electrons of the aromatic ring and vacant d-orbitals of surface iron atoms. In second mode, since it is well known that the mild steel surface bears positive charge in acid solution it is difficult for the protonated molecules to approach the positively charged mild steel surface (H3O+/metal interface) due to the electrostatic repulsion (Mu et al., 1996). Since SO42- have a smaller degree of hydration, they could bring excess negative charges in the vicinity of the interface and favour more adsorption of the positively charged inhibitor molecules, the protonated inhibitors adsorb through electrostatic interactions between the positively charged molecules and the negatively charged metal surface. Thus, there is a synergism between adsorbed SO42- ions and protonated inhibitors. Thus, inhibition of mild steel corrosion in 0.5 M H2SO4 is due to the adsorption of phytochemical constituents on the mild steel surface (Singh et al., 2010; Ahamad et al., 2011).

It is important to mention that the knowledge of action method facilitates the choice of the inhibitors and improves efficiency. It could also avoid the process side effects. As a continuation of this work, we will try to study the effect of temperature on corrosive inhibition efficiency of caraway seed oil.

This study was funded by the Tunisian Ministry of Higher Education, Scientific Research.