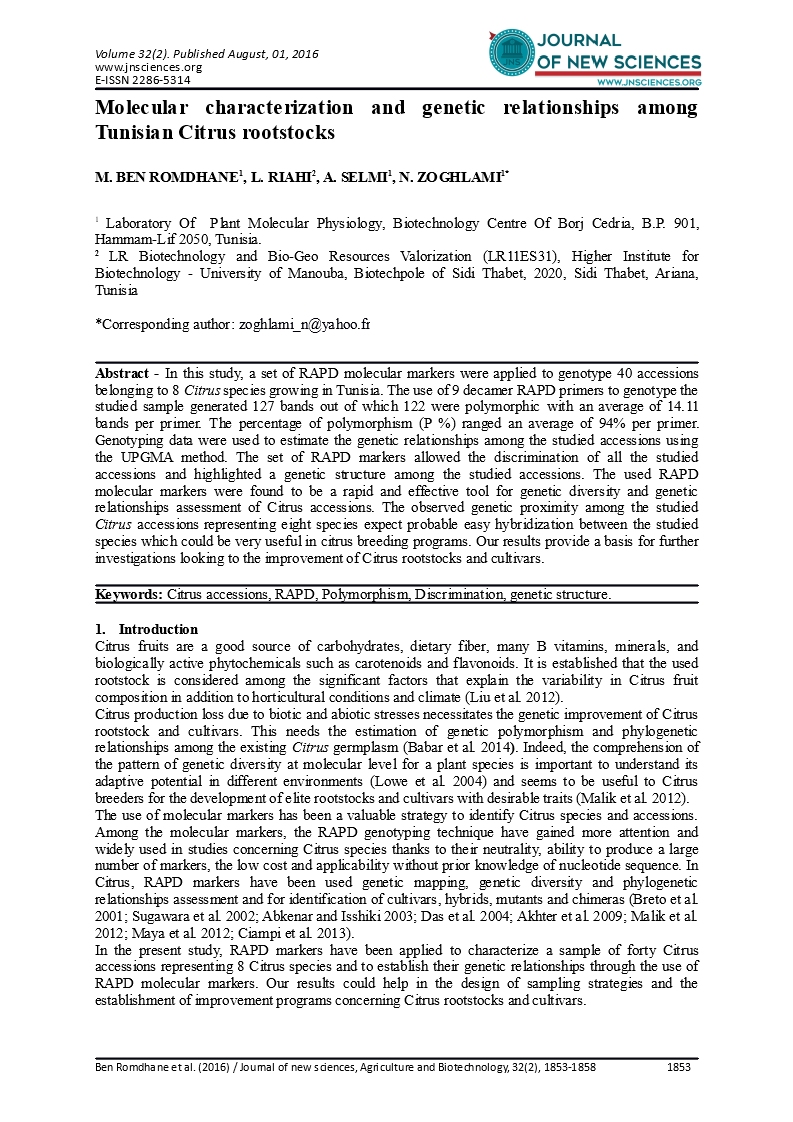 Abstract - In this study, a set of RAPD molecular markers were applied to genotype 40 accessions belonging to 8 Citrus species growing in Tunisia. The use of 9 decamer RAPD primers to genotype the studied sample generated 127 bands out of which 122 were polymorphic with an average of 14.11 bands per primer. The percentage of polymorphism (P %) ranged an average of 94% per primer. Genotyping data were used to estimate the genetic relationships among the studied accessions using the UPGMA method. The set of RAPD markers allowed the discrimination of all the studied accessions and highlighted a genetic structure among the studied accessions. The used RAPD molecular markers were found to be a rapid and effective tool for genetic diversity and genetic relationships assessment of Citrus accessions. The observed genetic proximity among the studied Citrus accessions representing eight species expect probable easy hybridization between the studied species which could be very useful in citrus breeding programs. Our results provide a basis for further investigations looking to the improvement of Citrus rootstocks and cultivars.

Citrus fruits are a good source of carbohydrates, dietary fiber, many B vitamins, minerals, and biologically active phytochemicals such as carotenoids and flavonoids. It is established that the used rootstock is considered among the significant factors that explain the variability in Citrus fruit composition in addition to horticultural conditions and climate (Liu et al. 2012).

Citrus production loss due to biotic and abiotic stresses necessitates the genetic improvement of Citrus rootstock and cultivars. This needs the estimation of genetic polymorphism and phylogenetic relationships among the existing Citrus germplasm (Babar et al. 2014). Indeed, the comprehension of the pattern of genetic diversity at molecular level for a plant species is important to understand its adaptive potential in different environments (Lowe et al. 2004) and seems to be useful to Citrus breeders for the development of elite rootstocks and cultivars with desirable traits (Malik et al. 2012).

The use of molecular markers has been a valuable strategy to identify Citrus species and accessions. Among the molecular markers, the RAPD genotyping technique have gained more attention and widely used in studies concerning Citrus species thanks to their neutrality, ability to produce a large number of markers, the low cost and applicability without prior knowledge of nucleotide sequence. In Citrus, RAPD markers have been used genetic mapping, genetic diversity and phylogenetic relationships assessment and for identification of cultivars, hybrids, mutants and chimeras (Breto et al. 2001; Sugawara et al. 2002; Abkenar and Isshiki 2003; Das et al. 2004; Akhter et al. 2009; Malik et al. 2012; Maya et al. 2012; Ciampi et al. 2013).

In the present study, RAPD markers have been applied to characterize a sample of forty Citrus accessions representing 8 Citrus species and to establish their genetic relationships through the use of RAPD molecular markers. Our results could help in the design of sampling strategies and the establishment of improvement programs concerning Citrus rootstocks and cultivars.

A total of forty Citrus accessions representing 8 Citrus species were provided from the germplasm collection of Technical Citrus Centre (CTA) in Cap-Bon (Table 1). Young leaves were collected, frozen in liquid nitrogen and stored at -80°C until DNA extraction. Genomic DNA was extracted from leaf tissue in accordance to method described by Bowers et al. (1996) as modified by Zoghlami et al. (2007).

Thirteen decamer primers (University of British Colombia) were tested of which 9 were selected for generating stable, polymorphic and reproducible bands (Table 2). RAPD amplifications were performed as described by Zoghlami et al. (2007). Each PCR reaction required 10 ng of genomic DNA, one unit of taq DNA polymerase (Promega), 5µM of UBC primers, 1.25 mM of MgCl2 and 1 µl of buffer 5X in a final volume of 10µl.

Amplifications were carried out in GeneAmp PCR-system 9700 thermal cycler. The program PCR included 30 s of denaturing at 94°C, then 45 cycles of 5 s of denaturing at 94°C followed by 2 min of annealing at 37°C, 1 min of elongation at 72°C and finally one cycle of extension at 72°C during 7 min. PCR products were separated on 1.6% agarose gel. The size of amplified fragments was estimated using the 100 pb ladder.

Among the obtained RAPD profiles, only stable and repeatable amplified fragments were scored as 0 for absent or 1 for present ones. Each selected band was named with its primer code and approximate size in base pairs. Monomorphic bands are deleted from investigation. The polymorphic bands were used to calculate the percentage of polymorphism (P %) by dividing number of polymorphic bands (PB) by the total number of bands (BT), and the number of RAPD banding profiles (BP) was recorded.

The resolving power (Prevost and Wilkinson 1999) of the each used primer (RP) was calculated following Gilbert et al. (1999). The software DARwin 5 (Perrier et al. 2003) was used to calculate genetic distances (DG) between individual pairs of genotypes and to build a phylogenetic tree applying the UPGMA topology method to visualize genetic relationships among the analyzed citrus accessions.

Based on the polymorphic markers, 247 RAPD banding patterns were assessed with an average of 27.44 profiles per primer which confirms the high level of genetic variation of the investigated Citrus accessions. For each used primer, resolving power (Rp) ranged from a minimum of 2.35 (UBC-211) to a maximum of 11.6 (UBC-226) with an average of 7.19 which highlighted a high discriminant ability of the used primers. Based on the number of polymorphic markers (PB), the percentage of polymorphism (P %) and the Resolving power (Rp), UBC-226 was the most discriminating and informative primer as representing the highest levels for the last parameters (Table 2). This makes it useful to genotype others citrus germplasms.

Based on our results, RAPD markers proved to be useful for analysis of variability in Citrus species. Our findings are consistent with previous recent investigations which prove that RAPD technique still a very fast, simple and an alternative method to characterize and manage citrus germplasms (Maya et al. 2012; Malik et al. 2012).

In order to highlight the genetic relationships between the studied accessions, an UPGMA tree was constructed based on the analysis of the RAPD loci (Figure 1). RAPD markers allowed the discrimination of all the studied genotypes. The investigated accessions were clustered into four groups labeled from A to D. A genetic structure of the studied accessions according to their species of origin with an overlapping was observed.

Our findings confirm results of Malik et al. (2012) who reported the potential of RAPD markers as a rapid, reproducible and useful method for distinguishing different cultivars of Citrus and their ability to cluster genotypes into different groups. Furthermore RAPD molecular markers have allowed the classification of accessions belonging to the same species together except minor cases which confirm results of Hussein et al. (2004) and Babar et al. (2014) who confirmed the utility of RAPD data to highlight informative phylogeny analysis among closely related Citrus accessions and species. The observed genetic proximity among the studied Citrus accessions representing eight species expect probable easy hybridization between the studied species which and could be very useful in citrus breeding programs.