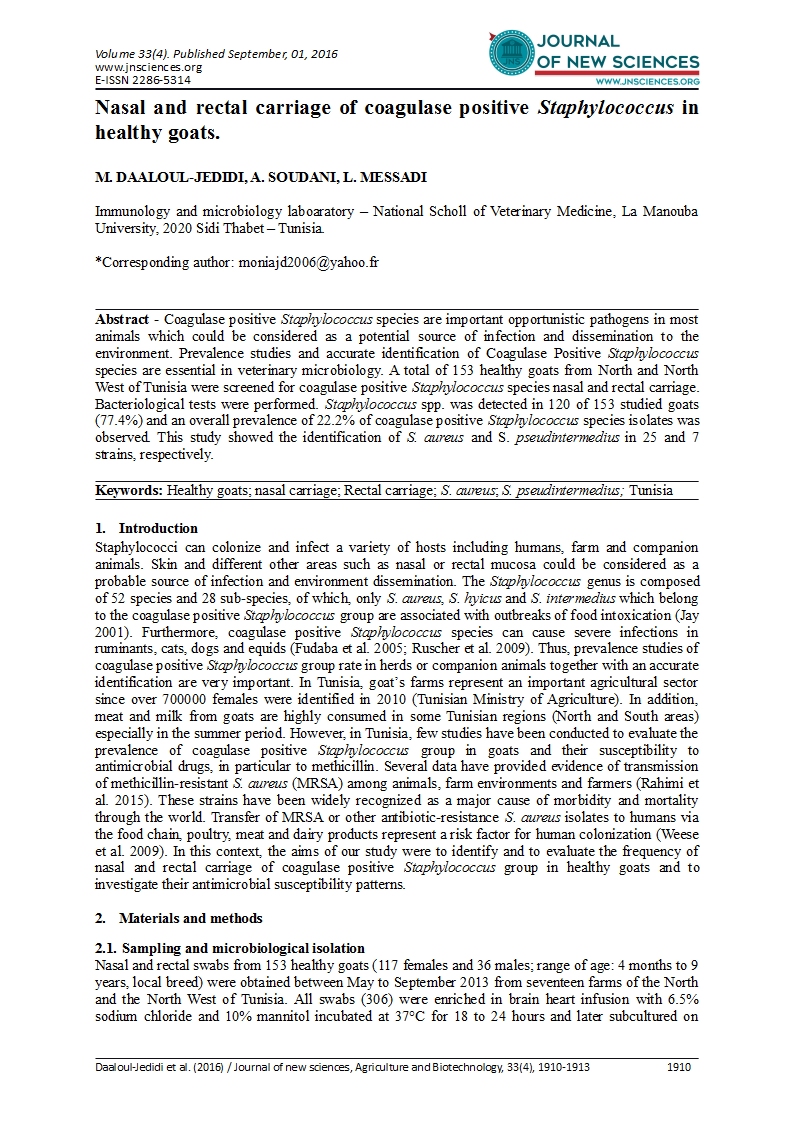 Staphylococci can colonize and infect a variety of hosts including humans, farm and companion animals. Skin and different other areas such as nasal or rectal mucosa could be considered as a probable source of infection and environment dissemination. The Staphylococcus genus is composed of 52 species and 28 sub-species, of which, only S. aureus, S. hyicus and S. intermedius which belong to the coagulase positive Staphylococcus group are associated with outbreaks of food intoxication (Jay 2001). Furthermore, coagulase positive Staphylococcus species can cause severe infections in ruminants, cats, dogs and equids (Fudaba et al. 2005; Ruscher et al. 2009). Thus, prevalence studies of coagulase positive Staphylococcus group rate in herds or companion animals together with an accurate identification are very important. In Tunisia, goat’s farms represent an important agricultural sector since over 700000 females were identified in 2010 (Tunisian Ministry of Agriculture). In addition, meat and milk from goats are highly consumed in some Tunisian regions (North and South areas) especially in the summer period. However, in Tunisia, few studies have been conducted to evaluate the prevalence of coagulase positive Staphylococcus group in goats and their susceptibility to antimicrobial drugs, in particular to methicillin. Several data have provided evidence of transmission of methicillin-resistant S. aureus (MRSA) among animals, farm environments and farmers (Rahimi et al. 2015). These strains have been widely recognized as a major cause of morbidity and mortality through the world. Transfer of MRSA or other antibiotic-resistance S. aureus isolates to humans via the food chain, poultry, meat and dairy products represent a risk factor for human colonization (Weese et al. 2009). In this context, the aims of our study were to identify and to evaluate the frequency of nasal and rectal carriage of coagulase positive Staphylococcus group in healthy goats and to investigate their antimicrobial susceptibility patterns.

Nasal and rectal swabs from 153 healthy goats (117 females and 36 males; range of age: 4 months to 9 years, local breed) were obtained between May to September 2013 from seventeen farms of the North and the North West of Tunisia. All swabs (306) were enriched in brain heart infusion with 6.5% sodium chloride and 10% mannitol incubated at 37°C for 18 to 24 hours and later subcultured on mannitol salt agar and sheep blood agar. Plates were incubated at 37°C for 24-48h. Positive cultures for Staphylococcus spp were identified by standard tests including Gram staining, catalase reaction, clumping factor A (bioMerieux®), oxidase reaction, mannitol fermentation, DNase production and ability to coagulate rabbit plasma. An API Staph® (bioMérieux) gallery was also performed for all isolates. In our study, only coagulase positive Staphylococcus isolates were investigated for antimicrobial susceptibility. The isolates were stored in Brain Heart Infusion (BHI) containing 15% glycerol at -20°C until tested.

Staphylococcus spp isolates were recovered from 120 (78.4%) of 153 healthy goats studied. From the 306 swabs, 172 were positive for Staphylococcus spp with 118 (68.6%) obtained from nasal cavities and 54 (31.4%) from fecal samples. Among these isolates, 138 were coagulase-negative and 34 were coagulase-positive. From these latter, 25 were from females (1 kid and 24 dairy goats) and 9 from males (1 kid and 8 adults). Coagulase positive Staphylococcus were observed in 28 nasal swabs versus only 6 isolates from rectal mucosa. A co-carriage in nasal and rectal mucosa was observed only in one adult male and one dairy female. Clumping factor test was positive in 30 strains.

Staphylococcus is an ubiquitous microorganism causing infections of skin and soft tissues especially when immune mechanisms of the host are compromised. Close human-animal contacts occur during pastures cleaning, feeding or petting the animals. Some farms breed their own goats and use their meat or milk, either for direct consumption or to make cheese (Schilling et al. 2012). It has been widely accepted that small ruminants play a role in the transmission of zoonotic diseases, such as salmonellosis, infections with Staphylococcus and many other pathogens. Since the coagulase positive Staphylococcus strains come from several sources and many animals are healthy carriers, preventing the spread of infection is a difficult task during the critical period of lambing and kidding, when many animals are in close proximity in a small area. Thus, ruminant’s nasal cavities or goat feces may be considered as a probable source of staphylococcal infections and environment spread.

S. aureus is an important causative agent for several pathologies in small ruminants (Foster 2012). It has been frequently associated with mastitis in goats, cattle and sheep, and clinical or sub-clinical infections in goats and sheep (Moroni et al. 2005). In addition to S. aureus, other coagulase positive Staphylococcus group species can cause severe infections compared with those caused by coagulase-negative staphylococci (Sasaki et al. 2010). Identification of the coagulase positive Staphylococcus group species is of great importance in veterinary microbiological laboratories since their minimal inhibition concentration (MIC) for oxacillin differs among species (Sasaki et al. 2010). However, their phenotypic discrimination is difficult to perform due to the lack of unique biochemical markers. So, several molecular methods have been reported for discriminating among coagulase positive Staphylococcus group species (Blaiotta et al. 2010; Gandra et al. 2015).

In our study, an overall prevalence of 22.2% of coagulase positive Staphylococcus group strains isolated from healthy goats was observed. The most prevalent species was S. aureus and it occurred in 16.3% (25/153) of the total population with a large frequency in nasal mucosa. Indeed, among the 25 S. aureus isolated, 19 were obtained from nasal swabs and 6 from rectal samples. Our findings are in agreement with others studies, including in clinical patients or the healthy human population, and indicate that nostrils are the most important reservoir and dissemination source of S. aureus within the community and to the hospital environment. The prevalence of S. aureus in nasal swabs from healthy goats was 12.4% (19/153). Our results are slightly lower than those reported by Gharsa et al. (19.2% of S. aureus in goats from North Tunisia) (Gharsa et al. 2015), and Rahimi et al. (25% in Iran) (Rahimi et al. 2015) and considerably lower than rates recorded in Norway (68.9%) (Mørk et al. 2010) and Denmark (64%) (Eriksson et al. 2013). On the other hand, previous reports have indicated a S. aureus nasal carriage rate of 6% in dairy goats (Valle et al. 1991) and a total absence of S. aureus in nasal swabs in dairy cows from Norway (Jørgensen et al. 2005) and the United Kingdom (Smith et al. 2005), despite a high frequency ofS. aureus mastitis. These different carriage rates could at least partially be due to self-care behaviors such as nose licking in herd goats and/or different farm managements.

Further investigations are necessary in order to confirm by molecular identification the S. aureus and S. pseudintermedius isolates and the results of the antimicrobial susceptibility tests. Emergence of drug resistant organisms, especially MRSA, is of particular concern to both animal and public health. In 2006, methicillin-resistant S. pseudintermedius (MRSP) has emerged as a significant animal health problem in veterinary medicine. This involves the potential for animals to act as reservoirs of MRSA, or of MRSP, with subsequent transmission to humans. In our study, all nasal or rectal carriage were related to methicillin-sensitive strains. This contrast with the situation in humans, where MRSA isolates are frequently observed and also with studies made in dairy herds in Southwest Germany (Spohr et al. 2011) and in Taiwan (Chishih et al. 2012). However, our findings are consistent with those described in the island of Sardinia, Italy (Virdis et al. 2012), in Iran (Rahimi et al. 2015), and in Tunisia (Gharsa et al. 2015). These differences could be explained by the fact that livestock-associated MRSA may evolve on farms because of the use of antibiotics in animal husbandry. These may be used as feed additives for growth promotion in industrial livestock, for prevention of disease within a herd or for treatment of an existing disease outbreak. On the contrary, in Tunisia, the use of antibiotics as growth promoters is banned and the national prophylactic program recommend vaccination against Brucella, enterotoxaemia, anthrax, bluetongue and foot and mouth disease in small ruminants. In our study, all visited farms advocate pastures in highlands with no antibiotic selection pressure what probably plays a role in the absence of MRSA and MRSP in the isolated strains, and the relatively low antimicrobial resistance rate observed.

S. aureus is often found as a commensal of the skin, skin glands and mucous membranes particularly in the nose of healthy individuals. This represents a real potential reservoir of dissemination among humans and animals. Indeed, S. aureus and also other species belonged to coagulase positive Staphylococcus group, can be transmitted among different species and cause skin and soft-tissue infections, systemic infections and toxemic syndromes. Both animals and humans can be contaminated, colonized or infected with S. pseudintermedius. Colonization with MRSP is more commonly reported in dogs which can carry the same or similar MRSP strains for months without infection. Our preliminary study describes the first report of S. pseudintermedius nasal carriage in healthy goats. S. aureus was the most prevalent coagulase positive Staphylococcus species in nostrils and no MRSA or MRSP isolates were observed. Additional studies will now include other farms from distinct geographic Tunisian regions, in order to further evaluate the prevalence of either nasal or rectal carriage of coagulase positiveStaphylococcus group, or of MRSA and MRSP strains in goats at a broader scale.