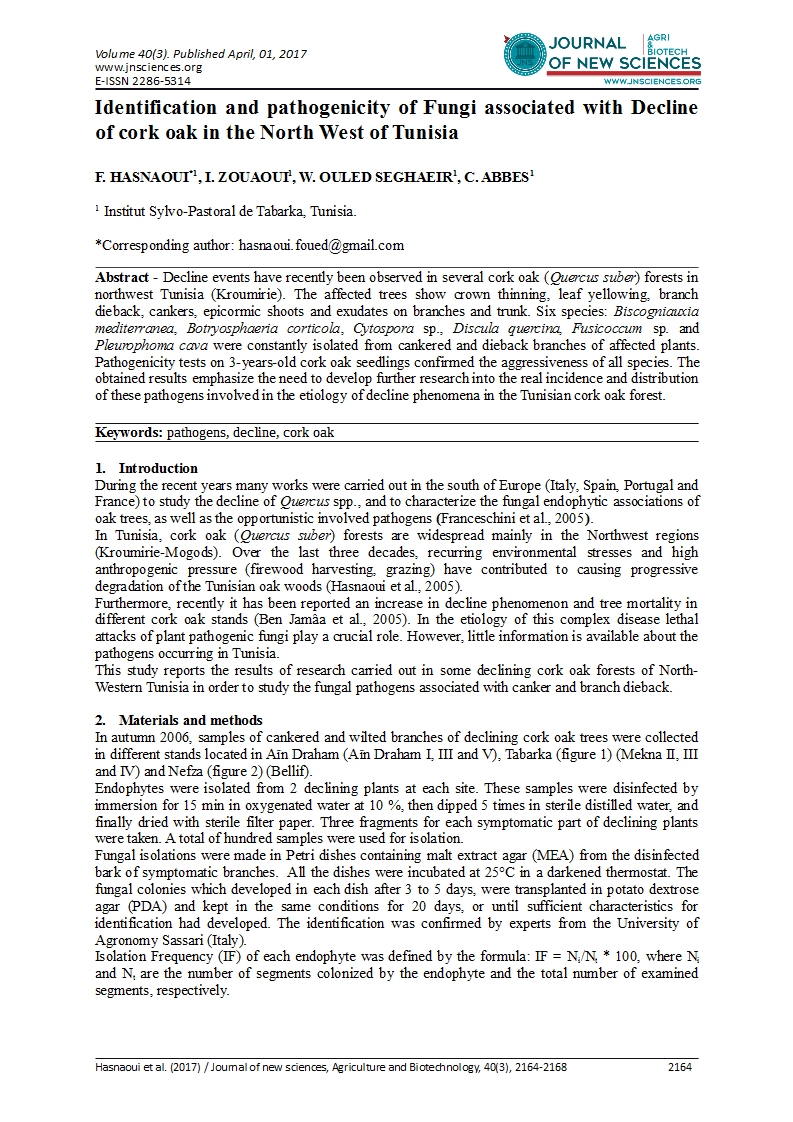 During the recent years many works were carried out in the south of Europe (Italy, Spain, Portugal and France) to study the decline of Quercus spp., and to characterize the fungal endophytic associations of oak trees, as well as the opportunistic involved pathogens (Franceschini et al., 2005).

Furthermore, recently it has been reported an increase in decline phenomenon and tree mortality in different cork oak stands (Ben Jamâa et al., 2005). In the etiology of this complex disease lethal attacks of plant pathogenic fungi play a crucial role. However, little information is available about the pathogens occurring in Tunisia.

This study reports the results of research carried out in some declining cork oak forests of North-Western Tunisia in order to study the fungal pathogens associated with canker and branch dieback.

Endophytes were isolated from 2 declining plants at each site. These samples were disinfected by immersion for 15 min in oxygenated water at 10 %, then dipped 5 times in sterile distilled water, and finally dried with sterile filter paper. Three fragments for each symptomatic part of declining plants were taken. A total of hundred samples were used for isolation.

Fungal isolations were made in Petri dishes containing malt extract agar (MEA) from the disinfected bark of symptomatic branches. All the dishes were incubated at 25°C in a darkened thermostat. The fungal colonies which developed in each dish after 3 to 5 days, were transplanted in potato dextrose agar (PDA) and kept in the same conditions for 20 days, or until sufficient characteristics for identification had developed. The identification was confirmed by experts from the University of Agronomy Sassari (Italy).

Isolation Frequency (IF) of each endophyte was defined by the formula: IF = Ni/Nt * 100, where Ni and Nt are the number of segments colonized by the endophyte and the total number of examined segments, respectively.

Pathogenicity tests of all fungi isolated were carried out on 2 years old cork oak seedlings maintained in a greenhouse for two months at 16-37°C. Groups of 7 seedlings were inoculated at the basis of the trunk with a mycelial plug (3–4 mm2) of each fungus, taken from the margin of an actively growing fungal colony on MEA.As control,7 seedlings were inoculated with a sterile MEA plug. At the end of the experimental period, the length of stem lesions caused by fungal pathogens was measured after removal of the outer bark. Re-isolation of the pathogens was performed on five disinfected stem segments (1 cm2) of bark removed from each seedling.

Data of stem lesion lengths (only one independent variable) were analysed by one-way ANOVA, and mean values were compared by LSD test using Statgraphics Plus software test at p = 0.05. This analysis for each parameter was performed to evaluate the fungi effects on plant health.