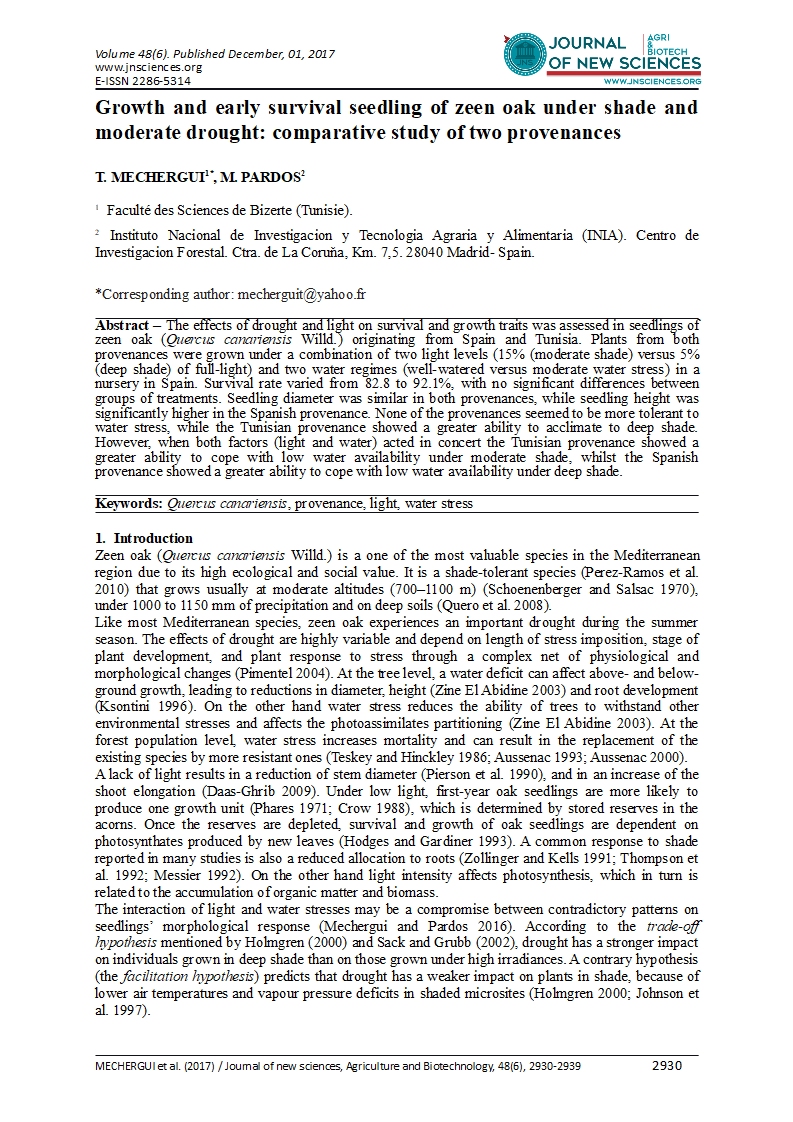 Zeen oak (Quercus canariensis Willd.) is a one of the most valuable species in the Mediterranean region due to its high ecological and social value. It is a shade-tolerant species (Perez-Ramos et al. 2010) that grows usually at moderate altitudes (700–1100 m) (Schoenenberger and Salsac 1970), under 1000 to 1150 mm of precipitation and on deep soils (Quero et al. 2008).

Like most Mediterranean species, zeen oak experiences an important drought during the summer season. The effects of drought are highly variable and depend on length of stress imposition, stage of plant development, and plant response to stress through a complex net of physiological and morphological changes (Pimentel 2004). At the tree level, a water deficit can affect above- and below-ground growth, leading to reductions in diameter, height (Zine El Abidine 2003) and root development (Ksontini 1996). On the other hand water stress reduces the ability of trees to withstand other environmental stresses and affects the photoassimilates partitioning (Zine El Abidine 2003). At the forest population level, water stress increases mortality and can result in the replacement of the existing species by more resistant ones (Teskey and Hinckley 1986; Aussenac 1993; Aussenac 2000).

A lack of light results in a reduction of stem diameter (Pierson et al. 1990), and in an increase of the shoot elongation (Daas-Ghrib 2009). Under low light, first-year oak seedlings are more likely to produce one growth unit (Phares 1971; Crow 1988), which is determined by stored reserves in the acorns. Once the reserves are depleted, survival and growth of oak seedlings are dependent on photosynthates produced by new leaves (Hodges and Gardiner 1993). A common response to shade reported in many studies is also a reduced allocation to roots (Zollinger and Kells 1991; Thompson et al. 1992; Messier 1992). On the other hand light intensity affects photosynthesis, which in turn is related to the accumulation of organic matter and biomass.

The interaction of light and water stresses may be a compromise between contradictory patterns on seedlings’ morphological response (Mechergui and Pardos 2016). According to the trade-off hypothesis mentioned by Holmgren (2000) and Sack and Grubb (2002), drought has a stronger impact on individuals grown in deep shade than on those grown under high irradiances. A contrary hypothesis (the facilitation hypothesis) predicts that drought has a weaker impact on plants in shade, because of lower air temperatures and vapour pressure deficits in shaded microsites (Holmgren 2000; Johnson et al. 1997).

Studies which have been carried out on growth response of oak seedlings to either water stress or shading were often limited to height, diameter and biomass measurements (Rao and Singh 1986; Messina and Duncan 1993; Wang and Bauerle 2006; Březina and Dobrovolný 2011). However, like other oak species (Champagnat et al. 1986; Harmer 1990), zeen oak has a typically rhythmic pattern of height growth (Mechergui et al. 2012). The study of the periodic height growth pattern of oak species allows the main stem to be divided on other morphological entities called the growth unit (GU) and gives useful information on this growth response characterization. The objective of this study was to compare the effects of water stress and/or shading on early survival seedling and growth of containerized zeen oak seedlings, originating from Spain and Tunisia, testing the two hypotheses (trade-off, facilitation).

On 15 March 2010, seedlings from each provenance were randomly assigned to two light treatments. Sixteen plants were placed into each of two metal frames covered with layers of neutral shade white cloth (Polysack Plastic Industries Ltd., Israel) to produce the two light environments. The percentage of photosynthetic photon flux density (PFD) inside and outside (greenhouse) metal frames was 5% (90 µmol·m–2·s–1) and 15% (250 µmol·m–2·s–1) of full-light, respectively. They correspond to deep and moderate shades (Puértolas et al. 2008), respectively. Light level inside the greenhouse and metal frames was calculated as a percentage of light outside the greenhouse.

Zeen oak’s growth is a rhythmical growth resulting in an alternation of rest and elongation phases during which a portion of stem or growth unit (GU) is established (Mechergui et al. 2012). Two variables were thus measured atthe main stem, at the end of the growing season, are the number and length of the GU.

A three-way ANOVA (provenance, light, water) was conducted for quantitative variables (seedling height, basal diameter, height-to-diameter ratio, below- and above-ground biomass, root-to-shoot ratio, total biomass, GU length) and comparisons between treatment means were made using Tukey test. Survival and number of GU established on the main stem (qualitative variables) were expressed in percentage (%). A comparison of mean percentages was then performed using a Chi2 test with the PROC FREQ procedure. Differences, between means or proportions, were considered significant at P ≤ 0.05. All data analyses were carried out with SAS 9.2 software (SAS Institute Inc., Cary, NC).

Survival at the end of the growing season varied between 82.8 per cent and 92.1 per cent. There were no significant differences between treatments (Table 1).

Significant factors for height growth were provenance and light intensity, while no significant effect was found for diameter growth (Table 2). Seedling height in the Spanish provenance was 2-fold the height in the Tunisian provenance (Fig. 1A). Independently of their provenance, seedlings were 28% taller under 5% of light than under 15% of full-light (Fig. 1B).

The decomposition of the main stem in GU showed that both provenances established 1 to 2 GU during the growing season. The number of established GU was not dependent neither on light intensity (P = 0.5668) nor on water regime (P = 0.3465), while a significant difference (P < 0.0001) between the provenances was found. The Tunisian provenance had more tendency to produce only one GU (75.4%), while the Spanish provenance usually produced two GU (85.7%).

With regard to GU length, significant factors for the first GU were provenance and light intensity, while significant factors for the second GU were provenance and light intensity in addition to the significant light × water regime interaction (Table 3). Both GU were longer for the Spanish than for the Tunisian provenance (Fig. 2A, Fig. 3A) and both GU were longer under 5% than under high 15% of full-light (Fig. 2B, Fig. 3B). However, as revealed by the light × water regime interaction, the effect of water regime on the second GU was dependent on light environment. Thus, under 5% of full-light GU length was significantly greater in well-watered than in water-stressed seedlings, while under 15% of full-light the difference was not significant (Fig. 3C).

Our results show that survival rate was independent of studied factors, provenance, light and water regime, and hence seedling mortality may be attributed to other factors rather than these factors.

A greater degree of shading stimulates the seedlings to grow more in height to reach available light (Jacobs and Steinbeck 2001). This was the reason for having significantly greater height growth under deep shade (5% of full-light) than under moderate shade (15% of full-light). Increased height-to-diameter ratio under deep shade comparatively to moderate shade reveals an unbalanced growth between height and basal diameter (Mechergui 2016). However, this unbalanced growth was a function of height growth as there was no reduction in diameter growth. The difference in this ratio between provenances, with greater value for the Spanish provenance, is a result of a difference in height growth which was also greater for the Spanish provenance (diameter growth was not different between provenances).

The decomposition of the main stem in GU showed that seedlings grown under deep shade expressed a significantly greater GU length for both GU, while the difference concerning the number of established GU was not significant, compared to seedlings grown under moderate shade. Accordingly, the greater height growth attributed to seedlings grown under deep shade is only the result of the increase in GU length. The comparison between provenances showed that the Spanish provenance had longer GU and tended to establish more GU. Hence, seedling height was significantly greater for the Spanish than for the Tunisian provenance as a result of an increase in both the number and the length of the produced GU on the main stem. It is important to remember that for the second GU water stress reduced length of this GU under deep shade, but not under moderate shade where the difference between water regimes was not significant. This indicates that deep shade altered seedlings’ ability to acclimate to water stress. This finding is in accordance with the trade-off hypothesis (Holmgren 2000; Sack and Grubb 2002; Smith and Huston 1989) that drought should have stronger impact in deep shade because of reduced root investment.

This research received financial support from the Superior Education Ministry and Scientific Research from Tunisia. The authors would like to thank the Instituto Nacional de Investigación y Tecnología Agraria y Alimentaria (Madrid—Spain) for the assistance on this research. Special thanks are given to Enrique Garriga for helping in the setup of the experiment.

Sack L, Grubb PJ (2002) The combined impacts of deep shade and drought on the growth and biomass allocation of shade-tolerant woody seedlings. Oecologia 131: 175 – 185