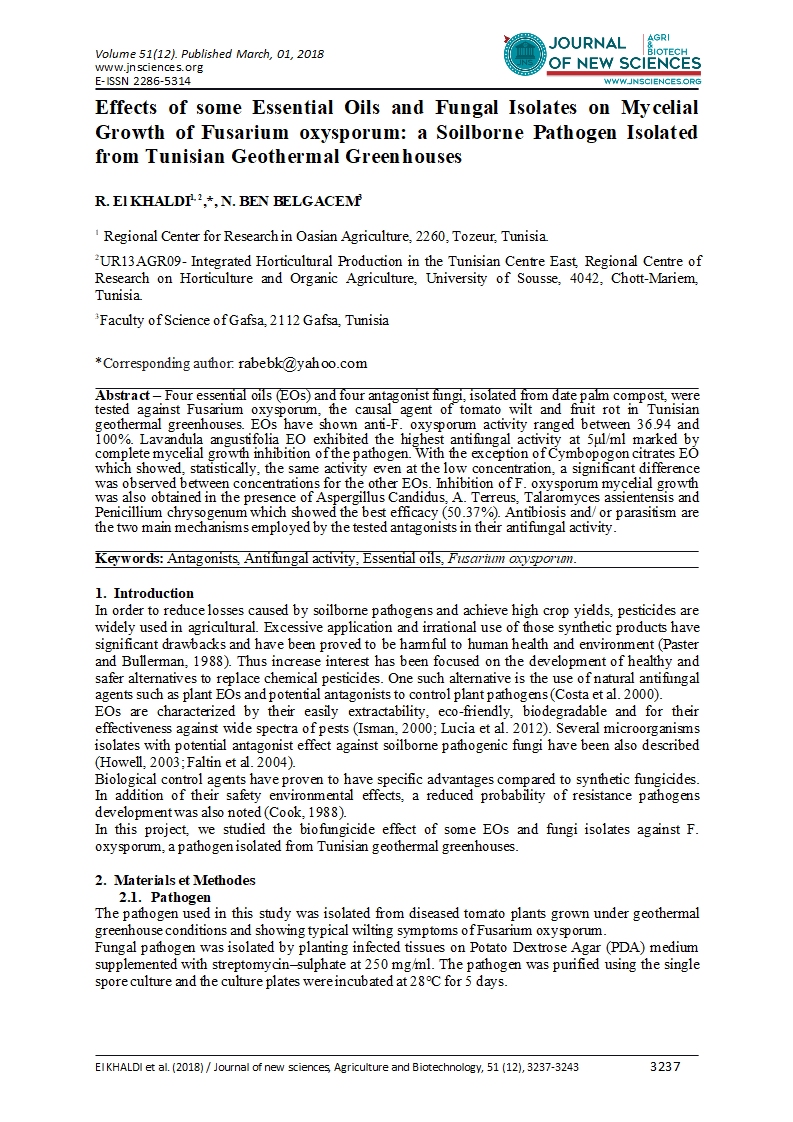 Abstract – Four essential oils (EOs) and four antagonist fungi, isolated from date palm compost, were tested against Fusarium oxysporum, the causal agent of tomato wilt and fruit rot in Tunisian geothermal greenhouses. EOs have shown anti-F. oxysporum activity ranged between 36.94 and 100%. Lavandula angustifolia EO exhibited the highest antifungal activity at 5μl/ml marked by complete mycelial growth inhibition of the pathogen. With the exception of Cymbopogon citrates EO which showed, statistically, the same activity even at the low concentration, a significant difference was observed between concentrations for the other EOs. Inhibition of F. oxysporum mycelial growth was also obtained in the presence of Aspergillus Candidus, A. Terreus, Talaromyces assientensis and Penicillium chrysogenum which showed the best efficacy (50.37%). Antibiosis and/ or parasitism are the two main mechanisms employed by the tested antagonists in their antifungal activity.

In order to reduce losses caused by soilborne pathogens and achieve high crop yields, pesticides are widely used in agricultural. Excessive application and irrational use of those synthetic products have significant drawbacks and have been proved to be harmful to human health and environment (Paster and Bullerman, 1988). Thus increase interest has been focused on the development of healthy and safer alternatives to replace chemical pesticides. One such alternative is the use of natural antifungal agents such as plant EOs and potential antagonists to control plant pathogens (Costa et al. 2000).

Biological control agents have proven to have specific advantages compared to synthetic fungicides. In addition of their safety environmental effects, a reduced probability of resistance pathogens development was also noted (Cook, 1988).

In this project, we studied the biofungicide effect of some EOs and fungi isolates against F. oxysporum, a pathogen isolated from Tunisian geothermal greenhouses.

The pathogen used in this study was isolated from diseased tomato plants grown under geothermal greenhouse conditions and showing typical wilting symptoms of Fusarium oxysporum.

Fungal pathogen was isolated by planting infected tissues on Potato Dextrose Agar (PDA) medium supplemented with streptomycin–sulphate at 250 mg/ml. The pathogen was purified using the single spore culture and the culture plates were incubated at 28°C for 5 days.

Biofungicide effects of EOs were assessed on PDA medium at concentrations of 0.2, 0.5, 2.5 and 5µl/ml. These concentrations were obtained by the addition of 4, 10, 50 and 100 μl of EO in 20 ml of the lukewarm PDA. After stirring, the medium was poured into 9 cm Petri dishes. 6 mm disc of 5 old culture of the pathogen was placed in the middle of each plate and then incubated at 28°C for 7 days.

Inoculated PDA without EOs served as a control. Data were expressed as percentage inhibition of mycelial growth relative to the control. Antifungal index was determined by the formula:

Antagonistic activity of fungal isolates against pathogen was tested according dual culture method. 6 mm discs of pathogen and each fungal isolate removed from the colony margin of actively growing cultures on PDA were placed equidistantly in the same Petri dish. Plates were then incubated in the dark at 28 °C for 7 days. The percentage inhibition of radial growth (I) of the pathogen was determined as: I%=100 × (r1 – r2)/r1] as described by Hmouni et al. (1996) where r1 and r2 = mean radial growth of pathogen in absence or presence of antagonist respectively.

Three plates were used per experiment for each treatment of biocontrol agent or EOs, and the whole experiment was repeated twice. Statistical analysis were performed with the STATISTICA software version5 and comparisons of group means were accomplished with the Newman–Keuls test at P ≤ 0.05

Linear regression analyses were performed to establish any correlations among different concentrations of EOs and their antifungal activity.

The antifungal activity of EOs on F. oxysporum was assessed by direct contact method. The obtained results are reported in Fig 1.

The relationship between dose response effect of the different EOs and the growth of F. oxysporum was assessed by correlation analysis (Fig 2). There was a significant positive correlation (P≤ 0.05) between the tested EO concentrations and the mean radial growth inhibition of F. oxysporum: L. angustifolia (R2= 0.84), O. majorana (R2= 0.96), S. chamaecyparissus (R2= 0.85) and C. citratus (R2= 0.68).

Comparison between tested EOs was further confirmed by comparing their effectiveness at the same concentration on the growth of F. oxysporum (Fig 3). Results showed that for the minimum concentration as well as for 0.5µl/ml concentration, with the exception of C. citratus, all the rest of EOs showed statically (P≤ 0.05) the same antifungal effect. For 2.5µl/ml concentration, L. angustifolia and C. citratus have the highest effect (91.84 and 92.65%) and they are not significantly different at P≤ 0.05. At 5 µl/ml, O. majorana and L. angustifolia EOs, which have significantly (P≤ 0.05) the same antifungal activity against the target, revealed the higher values of inhibition (100 and 97.96%, respectively) (Fig 4). 92.65% of radial growth inhibition was recorded with C. citratus EO and 76.73% with S. chamaecyparissus EO.

Four compost isolates were tested against F. oxysporum in dual culture plates (Fig 5). After 7 days at 28 °C, results of the antagonism tests showed that mycelia growth was inhibited an average of 18.86 % for T. assientensis, 47.54% for A. Terreus, 48.49% for A. Candidus and 50.37% for P. chrysogenum, which was the most effective biocontrol agent. Two different mode of inhibition to pathogen was observed: antibiosis and parasitism. No physical colony contact was observed between T. assientensis and F. oxysporum and an inhibition zone was observed, which indicates the presence of fungistatic metabolites secreted by the antagonist. For the remains fungi, they are able to overgrow the mycelium of F. oxysporum.

In recent years, there has been a growing interest in researching and developing of eco-friendly and sustainable alternatives to control phytopathogens in agriculture using natural antifungal agents (Costa et al. 2000). In this context, the aim of the current study was to evaluate the antifungal activity of selected EOs and biocontrol agents against F. oxysporum.

EOs extracted from L. angustifolia, O. majorana, S. chamaecyparissus andC. Citrates showed anti-F. oxysporum activity. All tested EOs concentrations are able to inhibit mycelia growth of the fungal. Previous studies reported that C. citratus essential oil has the potential for the control of Fusarium spp. in vitro. C. citratus EO decreased seven different species of Fusarium, growth in PDA even at the lowest concentration (Gawai, 2015) being in accordance with the present study. Gupta et al. (2011) and Manganyi et al. (2015) has obtained a completely inhibition growth of the isolate F. oxysporumby EO of C. citrates at some tested concentration. Strong antifungal effect against F. verticillioides was also observed at 500 and 1000 ppm C. citratus EO (Mishra and Dubey, 1994). This EO was found to be effective also for controlling other various range of plant pathogenic fungi such as A. niger (Baratta et al. 1998) A. flavous (Paranagama et al. 2003) and Cladosporium sp (Singatwadia and Katewa, 2001). Tzortzakis and Economakis (2007) revealed that fungal spore production of Colletotrichum coccodes, Botrytis cinerea, Cladosporium herbarum, and Rhizopus stolonifer was inhibited by C. citrates EO.

Although C. citratus was the most effective EO at all concentations, L. angustifolia and O. majorana showed the strongest antifungal activity at5 µl/l.

The effectiveness of Lavandula sp and Origanum sp EO has been proven in several studies against a variety of fungi. Antifungal activity of Origanum vulgare and Lavandula angustifolia essential oils was demonstrated against Aspergillus niger, A. ochraceus, Penicillium sp. and Trichoderma viride (Stupar et al. 2014).

Verticillium dahliae and Penicillium aurantiogriseum have shown a high sensitivity to the O. majorana EO and the mycelial growth was strongly inhibited for both species of fungi even at small concentrations (Rus et al. 2015). Angioni et al. (2006) reported the same tendency in an oil extract from Lavandula stoechas L. ssp. Stoechas for the inactivation of Rhizoctonia solani and F.oxysporum.

Despite its less activity compared to the others tested EOs, S. chamaecyparissus exhibited appreciable anti- F.oxysporum effect in our study. Assessed against F. solani, Khubeiz and Mansour (2016) showed the strong mycelial growth reduction with minimum inhibitory concentration (MIC) of about 0.8 mg/ml. While Nouasri et al. (2015) did not find any activity of this EO against Aspergillus flavus and moderate inhibition zone for Fusarium and Penicillium with higher MIC.

The antifungal activity of the fourth Tunisian EOs has been shown in our study. Variation in effectiveness can be attributed to difference in chemical composition between EOs (Soylu et al. 2010), structural configuration of the constituent components of the volatile oils and their functional groups (Kim and Park, 2012). Many scientific investigations have been conducted to identify the main components of EOs with antifungal activity. It was proved that the composition of EO varies because of different species and chemotypes (Knobloch et al. 1989; Tantaoui-Elaraki et al. 1993), and there is a hard link between the chemical structures of the most abundant compounds in EOs and the antifungal effect (Felšöciová et al. 2015).

Four compost indigenous fungi isolates, were also studied for their suitability as biocontrol agents against F. oxysporum. In vitro antagonism tests have shown the effectiveness of isolates in reduction of pathogen mycelia growth. Other studies performed with this species reported a potential in the control of R. solani with total inhibition (100%) of mycelial growth noted for A. candidus (El Khaldi et al. 2016). Mejdoub-Trabelsi et al. (2016) tested ten nonpathogenic Aspergillus spp. and Penicillium spp. isolates against Fusarium sambucinum, F. oxysporum and F. graminearum and reported a growth inhibition rate varied from 32 to 59%.

The data reported in this study show that EOs and selected fungal strains have antagonist effect against F. oxysporum. Superior effectiveness of EOs, compared to the isolates, was noted. These results might provide promising eco-friendly alternatives to the toxic fungicides for plant disease management.

However, further investigations are required for: identifying the most active antifungal compounds and secondary metabolites involved in this antagonistic activity, determining the mechanisms of action and quantifying their effect on disease incidence and severity.

We thank Dr. Chaieb Ikbal, researcher in Regional Center for Horticulture and Organic Agriculture (Entomology) for providing the essentials oils used in this study.

Howell CR (2003) Mechanisms Employed by Trichoderma Species in the Biological Control of Plant Diseases The History and Evolution of Current Concepts. Plant Disease 87: 4-10.