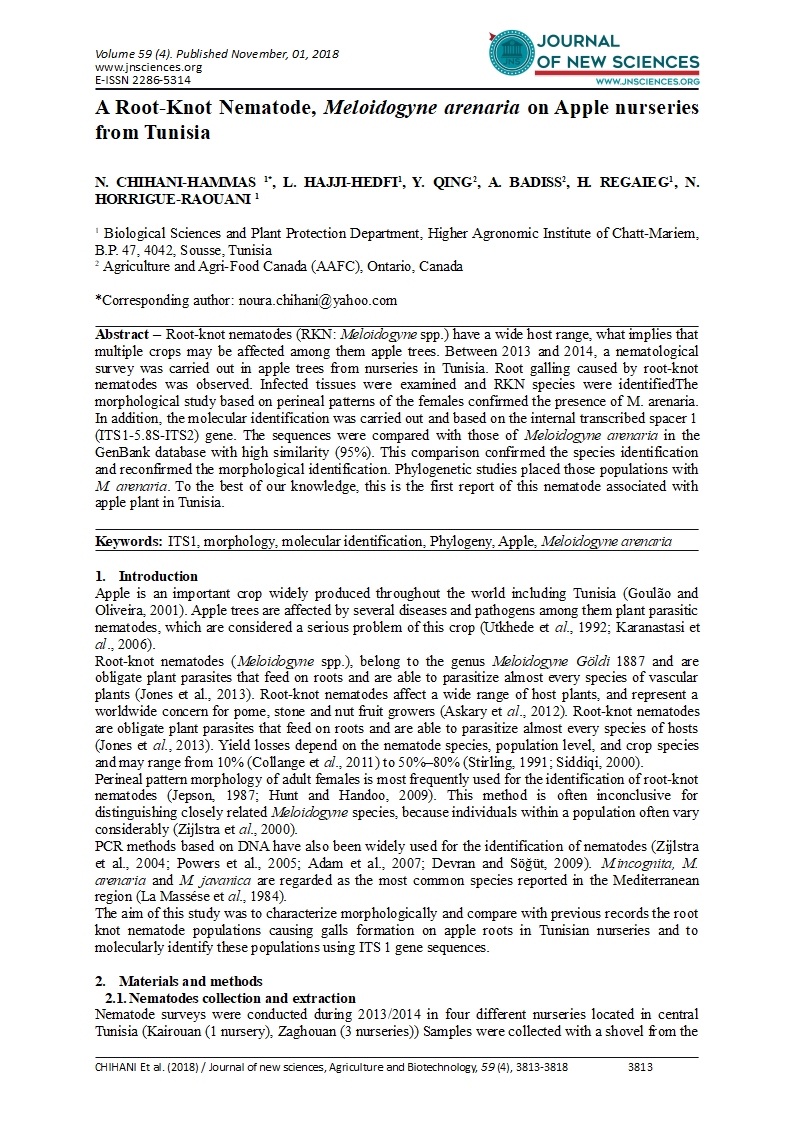 Abstract – Root-knot nematodes (RKN: Meloidogyne spp.) have a wide host range, what implies that multiple crops may be affected among them apple trees. Between 2013 and 2014, a nematological survey was carried out in apple trees from nurseries in Tunisia. Root galling caused by root-knot nematodes was observed. Infected tissues were examined and RKN species were identifiedThe morphological study based on perineal patterns of the females confirmed the presence of M. arenaria. In addition, the molecular identification was carried out and based on the internal transcribed spacer 1 (ITS1-5.8S-ITS2) gene. The sequences were compared with those of Meloidogyne arenaria in the GenBank database with high similarity (95%). This comparison confirmed the species identification and reconfirmed the morphological identification. Phylogenetic studies placed those populations with M. arenaria. To the best of our knowledge, this is the first report of this nematode associated with apple plant in Tunisia.

Apple is an important crop widely produced throughout the world including Tunisia (Goulão and Oliveira, 2001). Apple trees are affected by several diseases and pathogens among them plant parasitic nematodes, which are considered a serious problem of this crop (Utkhede et al., 1992; Karanastasi et al., 2006).

Perineal pattern morphology of adult females is most frequently used for the identification of root-knot nematodes (Jepson, 1987; Hunt and Handoo, 2009). This method is often inconclusive for distinguishing closely related Meloidogyne species, because individuals within a population often vary considerably (Zijlstra et al., 2000).

PCR methods based on DNA have also been widely used for the identification of nematodes (Zijlstra et al., 2004; Powers et al., 2005; Adam et al., 2007; Devran and Söğüt, 2009). M.incognita, M. arenaria and M. javanica are regarded as the most common species reported in the Mediterranean region (La Massése et al., 1984).

The aim of this study was to characterize morphologically and compare with previous records the root knot nematode populations causing galls formation on apple roots in Tunisian nurseries and to molecularly identify these populations using ITS 1 gene sequences.

Nematode surveys were conducted during 2013/2014 in four different nurseries located in central Tunisia (Kairouan (1 nursery), Zaghouan (3 nurseries)) Samples were collected with a shovel from the upper 50 cm of soil and roots from four orientations of the plant. Nematodes were extracted from 1g of infected roots (Figure 1) by a modified sugar centrifugal-flotation method (De Grisse, 1969). Population of root nematodes was evaluated under an optical microscope. Nematode cultures were then established from single egg mass whose adult females had previously been identified by observation of the morphological characteristics of their perineal patterns (Taylor and Sasser, 1978) and reared on tomato plants cv. Riogrande in a glasshouse at 28±1ºC. All populations obtained from single egg masses were maintained continuously in plastic pots at sterilized mixture of peat and sand (2:1). After two months, nematodes extracted from roots and used for further morphological and molecular analysis.

Female nematodes obtained from the first individuals of single egg mass cultures were used for perineal pattern studies. Indeed, the females were recovered from infected tomato roots. Ten individual females from each population were selected randomly and perineal patterns were cut in 45% lactic acid and mounted in glycerin (Taylor and Netscher, 1974; Hartman and Sasser, 1985). Perineal pattern studies were conducted under a light microscope according to Eisenback et al. (1981) and Jepson (1987).

The PCR products were separated by electrophoresis (110V, 45min) in 2.0% agarose gels in TAE buffer with 2.5 µl DNA Ladder gels are stained with Ethidium bromide, visualized and photographed under UV-light (Bio-rad DX, USA). All reactions were repeated twice for clear and stable banding patterns. The presence or absence of DNA fragments was scored as one or zero, respectively, in the binary matrix. Simple matching coefficients (SM) (Digby & Kempton, 1987).

The 18S fragments are sequenced with an ABI Prism 377 sequencer (Perkin Elmer) in both directions and unambiguous consensus sequences obtained. The sequences are deposited into the GenBank database. DNA sequences were aligned by Clustal W (http://workbench.sdsc.edu, Bioinformatics and Computational Biology group, Dept. Bioengineering, UC San Diego, CA). The sequences were compared with those of the other Meloidogyne species available at the GenBank sequence database using the BLAST homology search program. The Meloidogyne sequences are aligned using CLUSTALW implemented in the MEGA package (Kumar et al., 2008). Clade reliability is examined to through a nonparametric bootstrap with 1000 replicated samples. The phylogenetic tree was constructed by neighbor joining method with MEGA package v.7 (Kumar et al., 2016).

females perineal patterns from each Meloidogyne population were grouped into one root-knot species M. arenaria according to similar morphology by a main diagnostic feature for species identification. These patterns showed a generally low, round to indented dorsal arch near the lateral field with irregular forks in the lateral field, fine smooth striae (Figure 2). root knot nematode associated with apple tree had been reported in numerous studies but Itoh et al. (1969) were the first researchers who reported the presence of two species of Meloidogyne (M. mali and M. ulmi) on apple roots in Japan.

In Pakistan, Khan et al. (2010) have proven the presence of M. incognita associated with apple roots (Malus pumila Mill.). Similarly, Ranjan (2005) reported the presence of M. incognita in apple rootstocks in India. Mokbel et al. (2006) suggested that this specie (M. incognita) are found at high frequency associated with apple trees. Juveniles of the M. hapla root-knot nematode have been found in the soil of apple orchards in Slovakia (Liskova, 2007).

The morphological and molecular identification have confirmed the presence of M. arenaria associated with apple roots. The nuclear ribosomal DNA genes (internal transcribed spacer 1 or ITS1) of M. arenaria from Tunisia (KJ572384.1) were 95% similarity with those of Meloidogyne arenaria in the GenBank database. The phylogenetic tree based on ITS1 and obtained with the partial 18S confirmed a similar phylogenetic relationship with M. arenaria (Figure 3). In addition, the phylogenetic analysis showed the strong relationship of our M. arenaria with M. incognita (Figure3).

The perineal patterns and DNA analyses were evaluated mutually to confirm the identification of Meloidogyne arenaria present in four surveyed nurseries of apple trees.

Results indicated that only M. arenaria was found in 2 surveyed localities with different roots abundance: 3.25 % in Zaghouan region and 2.64% in Kairouan region. These results could be explained by the soil texture which is sandy- loamy in the Kairouan region whereas the region of zaghouan is characterized by clay-loam soil. According to Karssen et al. (2013), Meloidogyne spp. occurred on a wide range of soil types, but their association with crop damage is more readily observed in sandy and sandy-loamy soils.

The root knot nematode M. arenaria is commonly found on fruit tree roots especially peach and almond, whereas, this is the first report of this nematode associated with apple roots in Tunisia. This knowledge is important to understand the role of M. arenaria as stress factor on apple tree and for of the assessment of future control strategies.

The authors are thankful to the Agriculture and Agri-Food Canada (AAFC), Ontario, Canada, for assisting in the molecular identification of Meloidogyne species.

Subbotin SA, Vierstraete A, De Ley P et al (2001) Phylogenetic relationships within the cyst-forming nematodes (Nematoda, Heteroderidae) based on analysis of sequences from the ITS regions of ribosomal DNA. Mol. Phylog. Evol. 21:1-16.