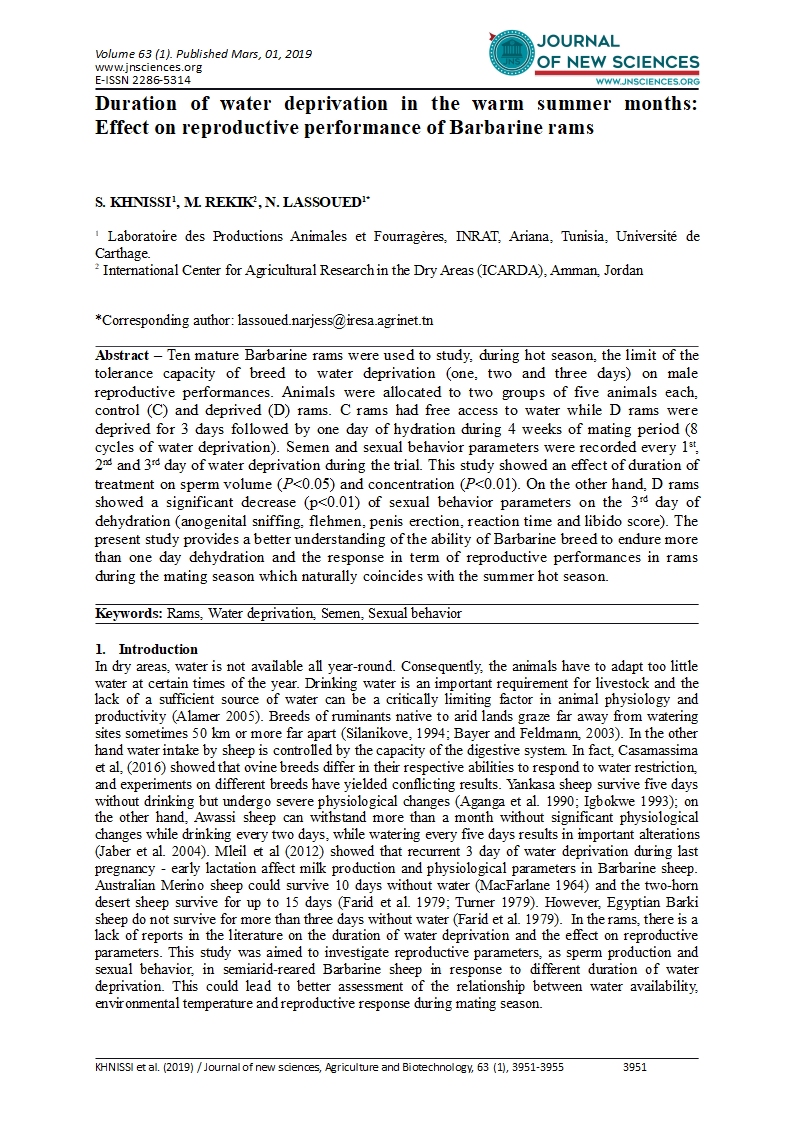 Abstract – Ten mature Barbarine rams were used to study, during hot season, the limit of the tolerance capacity of breed to water deprivation (one, two and three days) on male reproductive performances. Animals were allocated to two groups of five animals each, control (C) and deprived (D) rams. C rams had free access to water while D rams were deprived for 3 days followed by one day of hydration during 4 weeks of mating period (8 cycles of water deprivation). Semen and sexual behavior parameters were recorded every 1st, 2nd and 3rd day of water deprivation during the trial. This study showed an effect of duration of treatment on sperm volume (P<0.05) and concentration (P<0.01). On the other hand, D rams showed a significant decrease (p<0.01) of sexual behavior parameters on the 3rd day of dehydration (anogenital sniffing, flehmen, penis erection, reaction time and libido score). The present study provides a better understanding of the ability of Barbarine breed to endure more than one day dehydration and the response in term of reproductive performances in rams during the mating season which naturally coincides with the summer hot season.

In dry areas, water is not available all year-round. Consequently, the animals have to adapt too little water at certain times of the year. Drinking water is an important requirement for livestock and the lack of a sufficient source of water can be a critically limiting factor in animal physiology and productivity (Alamer 2005). Breeds of ruminants native to arid lands graze far away from watering sites sometimes 50 km or more far apart (Silanikove, 1994; Bayer and Feldmann, 2003). In the other hand water intake by sheep is controlled by the capacity of the digestive system. In fact, Casamassima et al, (2016) showed that ovine breeds differ in their respective abilities to respond to water restriction, and experiments on different breeds have yielded conflicting results. Yankasa sheep survive five days without drinking but un­dergo severe physiological changes (Aganga et al. 1990; Igbokwe 1993); on the other hand, Awassi sheep can withstand more than a month without significant physiological changes while drinking every two days, while watering every five days re­sults in important alterations (Jaber et al. 2004). Mleil et al (2012) showed that recurrent 3 day of water deprivation during last pregnancy - early lactation affect milk production and physiological parameters in Barbarine sheep. Australian Merino sheep could survive 10 days without water (MacFarlane 1964) and the two-horn desert sheep survive for up to 15 days (Farid et al. 1979; Turner 1979). However, Egyptian Barki sheep do not survive for more than three days without water (Farid et al. 1979). In the rams, there is a lack of reports in the literature on the duration of water deprivation and the effect on reproductive parameters. This study was aimed to investigate reproductive parameters, as sperm production and sexual behavior, in semiarid-reared Barbarine sheep in response to different duration of water deprivation. This could lead to better assessment of the relationship between water availability, environmental temperature and reproductive response during mating season.

The trial lasted was carried out on July under natural photoperiod and temperature conditions. Ten sexually experienced mature Barbarine rams were used. All animals had been reared under similar conditions in the research farm of Bou rebiaà of the National Institute of Agricultural Research (INRAT). The station has a semi-arid climate is located 25 km South of the town of Tunis 36°38’ N North latitude, 10°07’ East longitude, average annual rainfall is 350 mm and represents the mean of 30 years. Animals were allocated to two groups, balanced for live body weight (LBW, 70.5 kg (S.E. 2.7)). Each group of animals was subjected to one of the following two treatments: Treatment (C) receiving water daily ad libitum and Treatment (D) receiving water once every three days. The trial lasted 4 weeks (8 cycles of 3 depriving days followed by one hydration day) Water deprivation in Group D was imposed gradually first for one day, then for 2 days and thereafter for 3 days. Water was offered in buckets (15 L capacity) daily in the morning to Group C, and of the watering days in Group D. Experimental rams were kept in a single barn, well ventilated, with a partition separating the watered and deprived groups. The animals were fed a mixture of straw (1.5 Kg/ram/day) and barley (500g/ram/day) divided into two daily meals (at 08:00 and 19:00 h).

All the reproductive parameters (spermiogram and libido test) were recorded on the 1st, 2nd and 3rd days of water deprivation during the 8 cycles. One ejaculate per day for each animal was collected to assess for volume, individual and mass motility, sperm concentration, and the percentage of live spermatozoa. Procedures outlined by Baril et al. (1993) were used to determine these parameters. The rams were trained to ejaculate into an artificial vagina using an estrous ewe as stimulus female for the ejaculation. Libido test was carried out on 6 x 6 m mating pens; rams being individually exposed to an estrous Barbarine ewes. Estrus was induced in these ewes by insertion of progestagen vaginal sponges, as described by Price et al. (1991). Each test lasted 15 minutes and genital sniffing, flehmen reaction intensity, erection of penis, approach to teaser, reaction time and libido score were recorded for each ram (Kilgour and Whale.1980).

The data obtained are presented as (means ± S.E.M). The statistical analysis was performed according to standard methods (SAS 2005). The analysis of variance (ANOVA) test was used to evaluate the effect of duration (number of days) of water deprivation on the parameters investigated.

Climate change is affecting more and more water reserves especially in semi arid zones. Unavailability of water in addition to high temperatures affects herd productivity at different levels. Reproductive parameters could be an indicator for the welfare and health of animals. Barbarine breed is known by its adaptation capacity to dry areas conditions. Dehydration tolerance can be assessed by the maintain of sufficient energetic state to ensure reproductive activity. The current study revealed significant effect of the water depriving from the third day on the majority of spermatic and sexual behavior parameters.

A number of studies have demonstrated that the spermatogenesis in rams is sensitive to hot temperature (Mahouachi and Khaldi, 1988; Abdel-Hafez, 2002; Marai et al. 2008; Hamilton et al. 2016; Hamilton et al. 2018). Mahouachi and Khaldi (1988) showed, in the Barbarine breed, that high temperature of August decreases semen quality. This effect is added, in our study to water stress and shows that this breed is able to maintain spermatic qualities after two days of dehydration. In fact, water deprivation under dry condition decreased significantly sperm production that was probably due to a decrease of metabolic rate that indicate an energy conservation response (Choshniak et al., 1995). Ejaculation volume depends primarily upon the secretion of seminal plasma rather than concentration which explains the increase on semen cells concentration. On the other hand, there was a tendency to decrease of motility according to the day of collect. This effect could be more pronounced if the dehydration period was extended to more than 60 days, duration of spermatogenesis. The values of mass and individual motility were in the usual values of the breed (Mahouachi and Khaldi, 1988). In the other hand, obtained values in the 3rd day of water deprivation remain in the standards of a spermatic quality which allows a natural mating during the hot season (Khnissi et al, 2015).

Our study showed a drop in sexual activity in deprived rams at the third day of water deprivation as compared to one and two depriving days. Mahouachi and Khaldi (1988) demonstrated in the same breed, an increase of sexual behavior during summer due the seasonality of sexual activity. The observed decrease of sexual behavior was due to dehydration since an imperceptible state of dehydration results in lower of physical capacity. Some authors have suggested that energy has a greater effect on sexual activity because it implies an important physical effort and therefore important energy expenditure (Brown, 1994). In this respect, it is true that water deprived rams uses more energy for thermoregulation. The gradual decrease in libido score and in the time of the first mount in deprived animals depending of the level of water deprivation showed that Barbarine rams can tolerate one and two days of dehydration without an important effect but after three days of water deprivation sexual behavior was dramatically affected and this result is attributed to the depletion of the energy reserves of animals deprived of water in the third day.

This work was supported by International Atomic Energy Agency (IAEA project TUN5028) and the Tunisian Ministry of Higher Education and Scientific Research. The authors declare that there is no conflict of interest that would prejudice the impartiality of this scientific work.

Alamer, M (2005) Effect of deprivation and season on some biochemical constituents of blood in Awassi and Najdi sheep breeds in Saudi Arabia. Journal of Animal and Veterinary Advances 48, 15–20.

Bayer W and Feldmann A (2003) Diversity of animals adapted to smallholder system. Conservation and Sustainable Use of Agricultural Biodiversity. Available.

Chahal AS, PJS Ratane and O Parshad (1979) Some physicochemical studies on semen and their interrelationship during different seasons on corriedale rams. Indian. J. Animal. Sci., 49 (6): 433-437.

Galil KAA, Galil AKA (1982a) Seasonal variation in some characteristics of ejaculated spermatozoa of Sudan Desert sheep in the tropics. J. Agric. Sci. Camb., 99: 35-43.

Marai IFM, El-Darawany AA, Fadiel A and Abdel-Hafez MAM (2008) reproductive performance traits as affected by heat stress and its alleviation in sheep. Tropical and Subtropical Agroecosystems, 8: 209-234.

Silanikove N (1994) The struggle to maintain hydration and osmoregulation in animals experiencing severe dehydration and rapid rehydration: the story of ruminants. Exper. Physiol. 79: 281-300.