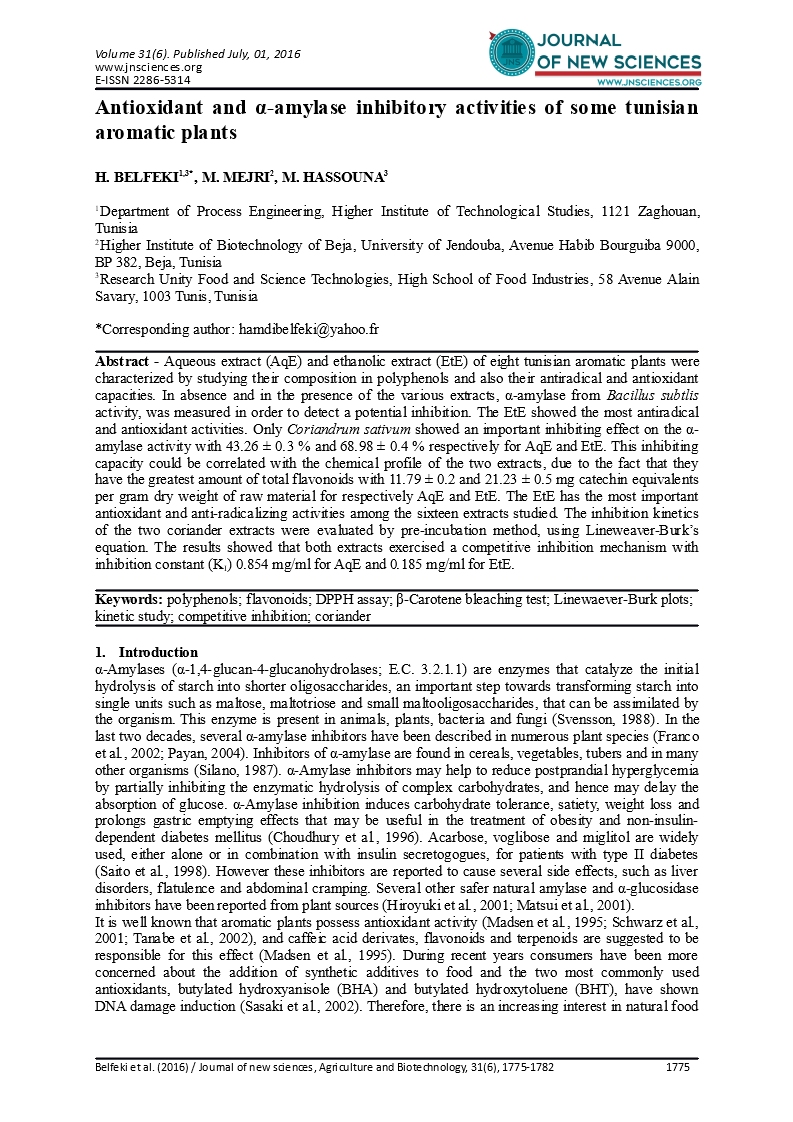 Abstract - Aqueous extract (AqE) and ethanolic extract (EtE) of eight tunisian aromatic plants were characterized by studying their composition in polyphenols and also their antiradical and antioxidant capacities. In absence and in the presence of the various extracts, α-amylase from Bacillus subtlis activity, was measured in order to detect a potential inhibition. The EtE showed the most antiradical and antioxidant activities. Only Coriandrum sativum showed an important inhibiting effect on the α-amylase activity with 43.26 ± 0.3 % and 68.98 ± 0.4 % respectively for AqE and EtE. This inhibiting capacity could be correlated with the chemical profile of the two extracts, due to the fact that they have the greatest amount of total flavonoids with 11.79 ± 0.2 and 21.23 ± 0.5 mg catechin equivalents per gram dry weight of raw material for respectively AqE and EtE. The EtE has the most important antioxidant and anti-radicalizing activities among the sixteen extracts studied. The inhibition kinetics of the two coriander extracts were evaluated by pre-incubation method, using Lineweaver-Burk’s equation. The results showed that both extracts exercised a competitive inhibition mechanism with inhibition constant (KI) 0.854 mg/ml for AqE and 0.185 mg/ml for EtE.

α-Amylases (α-1,4-glucan-4-glucanohydrolases; E.C. 3.2.1.1) are enzymes that catalyze the initial hydrolysis of starch into shorter oligosaccharides, an important step towards transforming starch into single units such as maltose, maltotriose and small maltooligosaccharides, that can be assimilated by the organism. This enzyme is present in animals, plants, bacteria and fungi (Svensson, 1988). In the last two decades, several α-amylase inhibitors have been described in numerous plant species (Franco et al., 2002; Payan, 2004). Inhibitors of α-amylase are found in cereals, vegetables, tubers and in many other organisms (Silano, 1987). α-Amylase inhibitors may help to reduce postprandial hyperglycemia by partially inhibiting the enzymatic hydrolysis of complex carbohydrates, and hence may delay the absorption of glucose. α-Amylase inhibition induces carbohydrate tolerance, satiety, weight loss and prolongs gastric emptying effects that may be useful in the treatment of obesity and non-insulin-dependent diabetes mellitus (Choudhury et al., 1996). Acarbose, voglibose and miglitol are widely used, either alone or in combination with insulin secretogogues, for patients with type II diabetes (Saito et al., 1998). However these inhibitors are reported to cause several side effects, such as liver disorders, flatulence and abdominal cramping. Several other safer natural amylase and α-glucosidase inhibitors have been reported from plant sources (Hiroyuki et al., 2001; Matsui et al., 2001).

It is well known that aromatic plants possess antioxidant activity (Madsen et al., 1995; Schwarz et al., 2001; Tanabe et al., 2002), and caffeic acid derivates, flavonoids and terpenoids are suggested to be responsible for this effect (Madsen et al., 1995). During recent years consumers have been more concerned about the addition of synthetic additives to food and the two most commonly used antioxidants, butylated hydroxyanisole (BHA) and butylated hydroxytoluene (BHT), have shown DNA damage induction (Sasaki et al., 2002). Therefore, there is an increasing interest in natural food additives, such as aromatic plants or aromatic plants extracts, which can function as natural antioxidants besides seasoning the food. In addition, polyphenols are known to inhibit the activity of digestive enzymes such as amylase, glucosidase, pepsin, trypsin and lipase, and the subject has been studied extensively (Rohn et al., 2002). In this study, eight tunisian aromatic plants were selected on the basis of their use in traditional medicines and kitchen through north africa. Extracts of these species were tested for their antioxidant and anti α-amylase activity.

Each part used of Trigonella foenum graecum, Coriandrum sativum, Helienthus annuus, Allium sativum, Artemisia herba alba, Capparis spinosa, Ocimum basilicum and Jenupersus phoeniceae was cut or sliced into small pieces and air-dried in the shade. The dried samples were then ground to a fine powder using a grinder. Maceration of crude powder was carried out in a one-step extraction (batch mode). Dried sample (10 g) was extracted with 100 ml of distilled water or ethanol. The mixture was agitated during 30 min and kept 24 h in -4 °C in darkness. Finally the mixture was filtered through a No. 1 Whatman paper.

The capacity of prepared extracts to scavenge the 'stable' free radical 2,2-diphenyl-1-picrylhydrazyl (DPPH) was monitored (Hatano et al., 1988). The radical scavenging activity (RSA) was calculated as a percentage of DPPH discoloration using the equation:

Starch in a 0.1 M Tris-HCl buffer (pH 6) was used as a substrate solution (Bernfeld, 1955). In this experiment (non-pre-incubation method), plant extract and starch were mixed. The reaction was started by the addition of enzyme. The tubes were incubated at 60 °C for 10 min. Final concentrations in the incubation mixture were plant extract, 0.4 mg/ml, 0.8 mg/ml starch and 0.02 mg/ml enzyme. The reaction was terminated by adding 1 ml of dinitrosalicylic acid solution (DNS) and boiled for 10 min in a boiling water bath, and 1 ml of distilled water was added. Enzyme activity (EA) was quantified by measuring the reducing sugar released as the glucose standard from the substrate per min and per mg of enzyme at 540 nm (1 EA = 1 µmol eq glucose/min.mg). The α-amylase inhibition (αAI) was calculated according the following formula:

In the second experiment (a pre-incubation method), α-amylase was pre-incubated 10 min at room temperature with the plant extract and the reaction was started by the addition of starch solution at different concentrations (0.2 - 2 mg/ml). The final concentration of the α-amylase inhibitor was 0.4 mg/ml. The rest of the procedure was carried out as in the first experiment. The Michaelis constant (KM), inhibition constant (KI), maximal velocity (Vm) and the inhibition mode was determined using Lineweaver–Burk equation:

The IC50 values of the crude ethanolic and aqueous extracts from the eight plant species were examined as shown in figure 1.

The antioxidant activity of ethanolic and aqueous extracts was also evaluated, in comparison with synthetic antioxidant BHT, by β-carotene/linoleic acid bleaching method as shown in figure 2. Extraction in ethanol was found to be more efficient than water in extracting the antioxidants present in the tunisian aromatic plants.

To detect a potential antidiabetic activity, α-amylase inhibition by 16 tunisian aromatic plants extracts was quantified by non-preincubation method as shown in table 2. Only Coriandrum sativum L. presented an important inhibitory effect in aqueous extract and in ethanolic extract. This inhibitory potency could be correlated with chemical profile of both extracts of Coriandrum sativum. Firstly, the two extracts are richer in total flavonoids. On the other hand, ethanolic extract has a greater antioxidant activity and second best free radical scavenging activity. These properties could explain the hypoglycemic activity of coriander demonstrated in many pharmacological studies (Gray & Flatt, 1999; Chithra et al., 1999).

The phenolic compounds may play a key role in the inhibition of starch digesting enzymes. Depending on the structure, the phenolics react with proteins/enzymes and alter various properties of biopolymers such as the molecular weight, solubility and in vitro digestibility. It has also been shown that the decrease in enzyme activity depends on the concentration as well as the number and position of hydroxyl groups of the phenolics (Rohn et al., 2002).

Kinetic studies were performed using the Michaelis–Menten and LB derivations to identify the mode of inhibition of coriander extracts. In the presence of crude aqueous and ethanolic extracts, straight lines were intercepted at a single point on the vertical axis indicating competitive inhibition as shown in figure 3.

Coriandrum sativum extracts affect α-amylase by competing with the substrate to bind to the active site of the enzyme. In this case, inhibitor can only bind to free enzyme decreasing affinity enzyme for its substrate. In fact, in the presence of aqueous and ethanolic extracts, maximum velocity (Vmax) remained constant but constant Michaeils (KM) increased as shown in table 3. An inhibitory constant (KI) value were obtained with following formula:

Ethanolic extract showed most important inhibitory effect than aqueous extract. This can be explained by its higher polyphenol and flavonoids content but also by its greater antioxidant and radical scavenging activity. This bioactivity results from the presence of large number of compounds identified in coriander, including flavonoids (quercetin and isoquercetin), polyphenols (rutin, caffeic acid derivatives, ferrulic acid, gallic acid and chlorogenic acid) and β-carotenoids (Melo et al., 2003). Synergy between phenolics may play a role in mediating amylase inhibition, and therefore have the potential to contribute to the management of type 2 Diabetes mellitus, which is characterized by high blood glucose levels (Saito et al., 1998; Toeller, 1994). Polyphenols may act as inhibitors of amylase and glucosidase (similar to acarbose, miglitol and voglibose) leading to a decrease in post-prandial hyperglycemia (Bailey, 2001).

In this study, it was shown that solvent polarity significantly affects the amount of total polyphenols and flavonoids, antioxidant capacity, radical scavenging activity and inhibitory potential of α-amylase. Tunisian aromatic plants tested have varied phytochemical profiles. The extracts obtained from Trigonella foenum graecum and Coriandrum sativum were rich in polyphenols and flavonoids. Pharmacological studies have demonstrated this antioxidant activity of Coriandrum sativum (Melo et al., 2003; Ramadan et al., 2003; Bajpai et al., 2005) and Trigonella foenum graecum (Kaviarasan et al., 2007), so they can be used as preservative ingredients in food industry if any resulting organoleptic effects are acceptable. Aqueous and ethanolic extract from coriander showed an important inhibitory effect on the α-amyalse by competitive mechanism.

Thus, we have described edible plant-based amylase inhibitors for modulation of carbohydrate breakdown and regulation of glycemic index of foods. Our results provide a scientific rationale for the use of coriander in pharmaceutical industry as a low cost nutrient useful in reducing the chronic pathologies such as diabetes mellitus. The inhibition of starch digestive enzymes by dietary phenolics may represent a biochemical rationale or mechanism for delivering some of the health benefits attributed to a diet rich in aromatic plants.

We are very grateful to Dr. Issam Smaïli (National Institute of Applied Science and Technology, Tunis, Tunisia) for providing us with enzyme and to Mrs. Fatma Souissi (Center of Biotechnology, Borj Cedria, Tunisia) for his help. This study received financial support from Ministry of Higher Education, Scientific Research and Information and Communication Technologies, Tunisia.