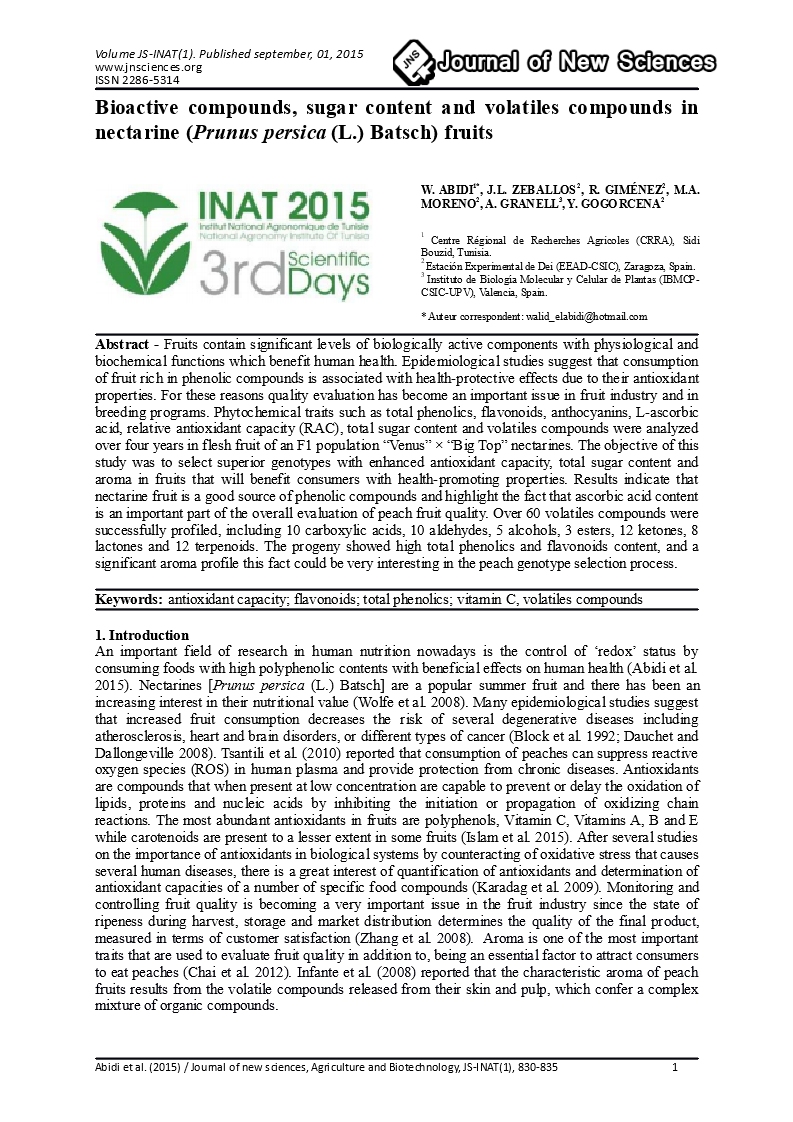 Abstract - Fruits contain significant levels of biologically active components with physiological and biochemical functions which benefit human health. Epidemiological studies suggest that consumption of fruit rich in phenolic compounds is associated with health-protective effects due to their antioxidant properties. For these reasons quality evaluation has become an important issue in fruit industry and in breeding programs. Phytochemical traits such as total phenolics, flavonoids, anthocyanins, L-ascorbic acid, relative antioxidant capacity (RAC), total sugar content and volatiles compounds were analyzed over four years in flesh fruit of an F1 population “Venus” × “Big Top” nectarines. The objective of this study was to select superior genotypes with enhanced antioxidant capacity, total sugar content and aroma in fruits that will benefit consumers with health-promoting properties. Results indicate that nectarine fruit is a good source of phenolic compounds and highlight the fact that ascorbic acid content is an important part of the overall evaluation of peach fruit quality. Over 60 volatiles compounds were successfully profiled, including 10 carboxylic acids, 10 aldehydes, 5 alcohols, 3 esters, 12 ketones, 8 lactones and 12 terpenoids. The progeny showed high total phenolics and flavonoids content, and a significant aroma profile this fact could be very interesting in the peach genotype selection process.

An important field of research in human nutrition nowadays is the control of ‘redox’ status by consuming foods with high polyphenolic contents with beneficial effects on human health (Abidi et al. 2015). Nectarines [Prunus persica (L.) Batsch] are a popular summer fruit and there has been an increasing interest in their nutritional value (Wolfe et al. 2008). Many epidemiological studies suggest that increased fruit consumption decreases the risk of several degenerative diseases including atherosclerosis, heart and brain disorders, or different types of cancer (Block et al. 1992; Dauchet and Dallongeville 2008). Tsantili et al. (2010) reported that consumption of peaches can suppress reactive oxygen species (ROS) in human plasma and provide protection from chronic diseases. Antioxidants are compounds that when present at low concentration are capable to prevent or delay the oxidation of lipids, proteins and nucleic acids by inhibiting the initiation or propagation of oxidizing chain reactions. The most abundant antioxidants in fruits are polyphenols, Vitamin C, Vitamins A, B and E while carotenoids are present to a lesser extent in some fruits (Islam et al. 2015). After several studies on the importance of antioxidants in biological systems by counteracting of oxidative stress that causes several human diseases, there is a great interest of quantification of antioxidants and determination of antioxidant capacities of a number of specific food compounds (Karadag et al. 2009). Monitoring and controlling fruit quality is becoming a very important issue in the fruit industry since the state of ripeness during harvest, storage and market distribution determines the quality of the final product, measured in terms of customer satisfaction (Zhang et al. 2008). Aroma is one of the most important traits that are used to evaluate fruit quality in addition to, being an essential factor to attract consumers to eat peaches (Chai et al. 2012). Infante et al. (2008) reported that the characteristic aroma of peach fruits results from the volatile compounds released from their skin and pulp, which confer a complex mixture of organic compounds.

The main objective of this work were to evaluate the content of antioxidant compounds, total sugar and volatile compounds in nectarine fruits, and to study the relationships among biochemicals fruit quality traits and their health protecting properties in a nectarine segregating F1 population.

The progeny assayed was a segregant F1 population of 75 seedlings obtained from a controlled cross between P. persica cvs. ‘Venus’ (female parent) and ‘BigTop’ (male parent). ‘Venus’ is a FMF (freestone melting flesh) nectarine cultivar, whereas ‘BigTop’ is a CMF (clingstone melting flesh) nectarine cultivar. The segregant population is entirely melting flesh, either cling- or freestone. Progenies were established during 2001 in a plot at the Experimental Station of Aula Dei (Zaragoza, Spain).

Twenty representative fruits were selected at harvest. They were peeled, cut in pieces, and 5 g samples were prepared, which were frozen in liquid nitrogen and stored at -20 ºC until analyses. Fruit samples were analyzed for sugars, vitamin C, total phenolics, flavonoids, anthocyanins content, and antioxidant capacity as described by Abidi et al. (2011). For the determination of ascorbic acid the samples were kept frozen in 5% metaphosphoric acid and homogenized at 4 ºC. Then, they were centrifuged at 16,000 rpm for 20 min at 4 ºC, and the supernatant was immediately used for vitamin C analysis. Absorbance was measured at 525 nm and the amount of vitamin C was expressed as mg of ascorbic acid (AsA) per 100 g fresh weight (FW) (Zaharieva and Abadía 2003). For the determination of sugars, at the moment of analysis the frozen fruit material (5 g) was homogenised in a Polytron (2 min on ice) with 10 mL of extraction solution consisting of 800 mL L−1 ethanol/Milli-Q water. The mixture was centrifuged at 16,000 rpm for 20 min at 4 ºC. The supernatant was recovered and assayed by high-performance liquid chromatography (HPLC) as described by Cantín et al. (2009a). For volatiles compounds, the head space solid phase microextraction was the method used for capturing volatiles. For head space analysis, a 65 μm polydimethylsiloxane–divinylbenzene (PDMS/DVB) SPME fiber (Supelco Inc. Bellefonte, PA, USA) was used (Sánchez et al. 2012).

All statistical analyses were performed using SPSS 19.0 (SPSS Inc., Chicago, IL). Data for each genotype in the four years of study were averaged, and mean values were used as estimated genotypic values.

The studied population exhibited wide phenotypic variations in sugar contents among genotypes (Table 2). Total sugars (the sum of sucrose, glucose, fructose and sorbitol contents) ranged from 45 to 205 mg/g of FW. Cantín et al. (2009a) reported that the average content of total sugars in the peeled nectarines fruit was 77.1 mg/g FW. Sucrose was the major sugar present in the evaluated genotypes, followed by fructose, glucose and sorbitol. Sorbitol content varied greatly among genotypes, ranging from 1.1 to 8.7 g kg−1 FW. Wu et al. (2005) reported that sucrose in peaches is dominant at maturity, followed by the reducing sugars (glucose and fructose) and then sorbitol.

A total of sixty volatile compounds were identified and relatively quantified in the nectarine population (Table 3).

Most of these compounds have been previously reported in peach fruit by other authors (Zhang et al. 2010) and are included among the 100 or so volatile compounds already identified in peach and nectarine fruits. The broad ranges (relative quantification) and the normal distribution found for some lactones in the population have significance in peach breeding since volatile compounds can be genetically controlled and aroma plays a central role in fruit quality (Figure 1).

Sánchez et al. (2012) identified and quantified a total of 110 volatile compounds including: alcohols, ketones, aldehydes, esters, lactones, carboxylic acids, phenolics and terpenoids in peach fruit samples from different genetic backgrounds, locations and maturity stages. Almost all the volatile compounds showed dramatic changes in the levels of accumulation among the different progeny genotypes. Most reports in the literature have focused on the evolution of peach and nectarine aromas during ripening (Wang et al., 2009, and references therein). During fruit maturation, lactones with long side chain (γ-decalactone, δ-decalactone), benzaldehyde and linalool levels increased, reaching the highest amounts in mature fruit (Toselli et al., 2010 and references therein).

Results indicate that nectarine fruit is a good source of phenolic compounds, vitamin C, sugar and volatile compounds and highlight the fact that ascorbic acid content is an important part of the overall evaluation of peach fruit quality. The comprehension of the biological mechanisms involved in the preventive action of these compounds on many chronic diseases must be elucidated to demonstrate their wide range of functions, many of which unrelated to the ability to absorb free radicals.