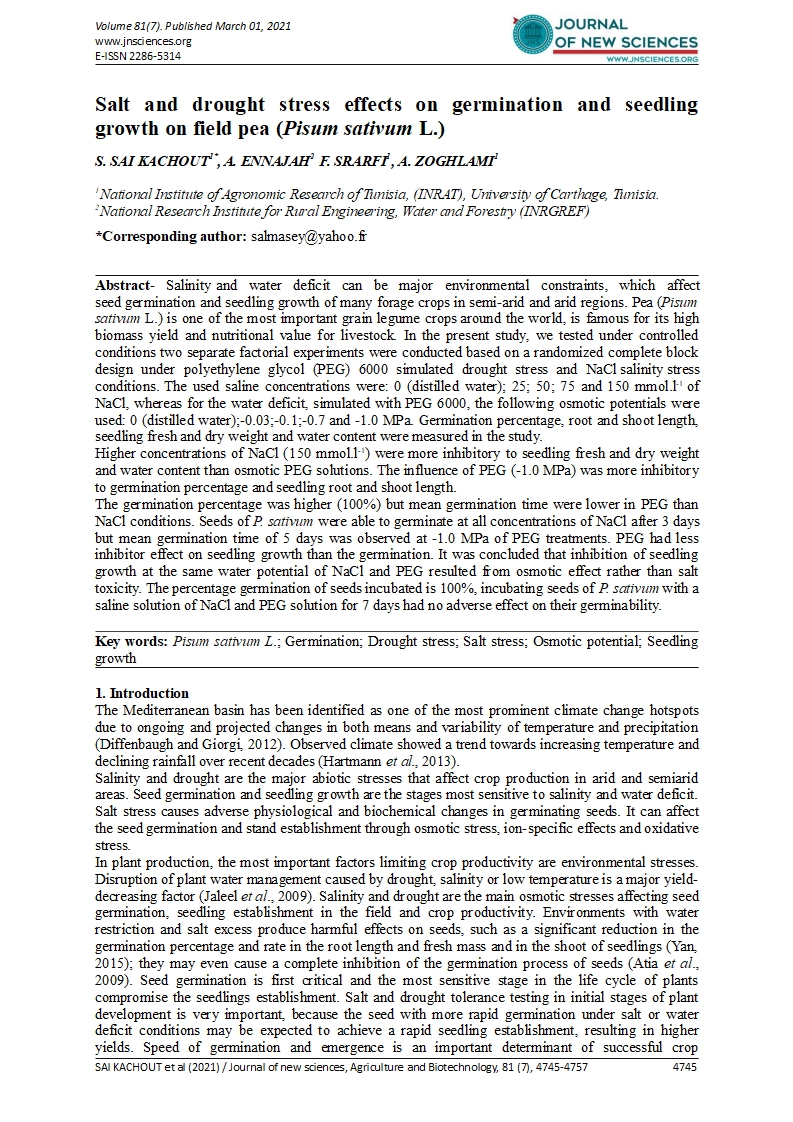 Abstract- Salinity and water deficit can be major environmental constraints, which affect seed germination and seedling growth of many forage crops in semi-arid and arid regions. Pea (Pisum sativum L.) is one of the most important grain legume crops around the world, is famous for its high biomass yield and nutritional value for livestock. In the present study, we tested under controlled conditions two separate factorial experiments were conducted based on a randomized complete block design under polyethylene glycol (PEG) 6000 simulated drought stress and NaCl salinity stress conditions. The used saline concentrations were: 0 (distilled water); 25; 50; 75 and 150 mmol.l-1 of NaCl, whereas for the water deficit, simulated with PEG 6000, the following osmotic potentials were used: 0 (distilled water);-0.03;-0.1;-0.7 and -1.0 MPa. Germination percentage, root and shoot length, seedling fresh and dry weight and water content were measured in the study. Higher concentrations of NaCl (150 mmol.l-1) were more inhibitory to seedling fresh and dry weight and water content than osmotic PEG solutions. The influence of PEG (-1.0 MPa) was more inhibitory to germination percentage and seedling root and shoot length. The germination percentage was higher (100%) but mean germination time were lower in PEG than NaCl conditions. Seeds of P. sativum were able to germinate at all concentrations of NaCl after 3 days but mean germination time of 5 days was observed at -1.0 MPa of PEG treatments. PEG had less inhibitor effect on seedling growth than the germination. It was concluded that inhibition of seedling growth at the same water potential of NaCl and PEG resulted from osmotic effect rather than salt toxicity. The percentage germination of seeds incubated is 100%, incubating seeds of P. sativum with a saline solution of NaCl and PEG solution for 7 days had no adverse effect on their germinability. 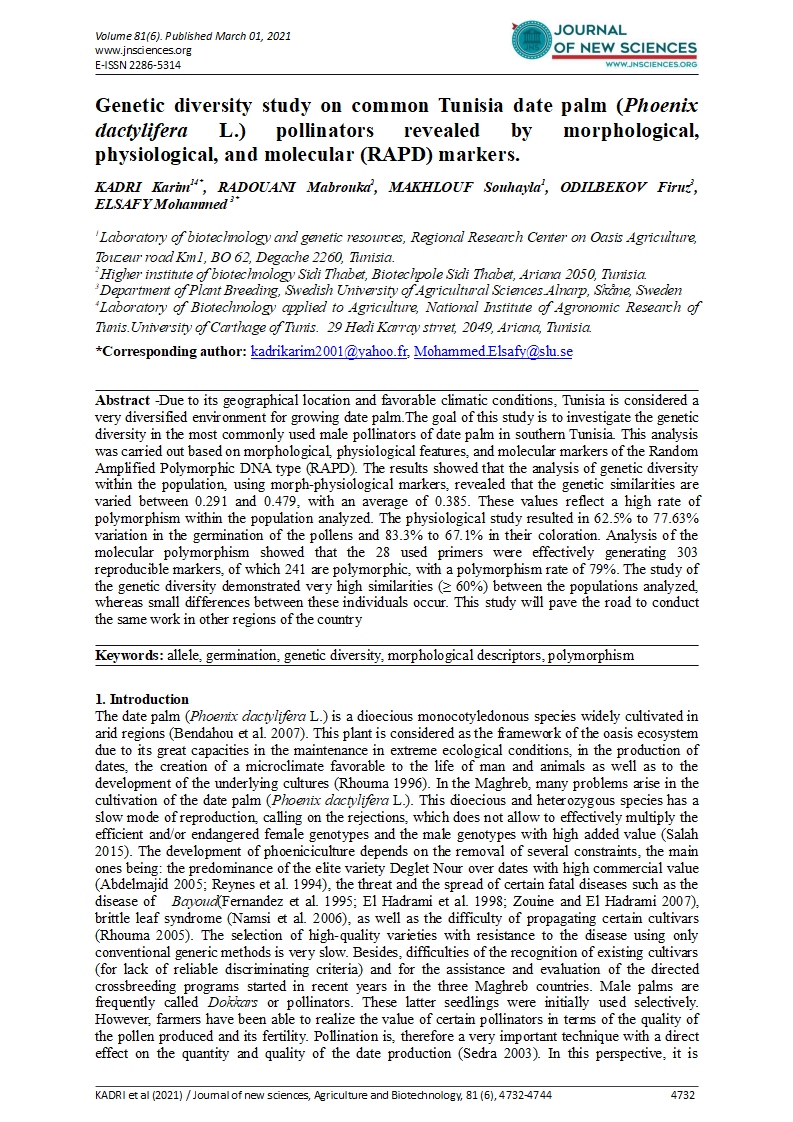 Abstract -Due to its geographical location and favorable climatic conditions, Tunisia is considered a very diversified environment for growing date palm.The goal of this study is to investigate the genetic diversity in the most commonly used male pollinators of date palm in southern Tunisia. This analysis was carried out based on morphological, physiological features, and molecular markers of the Random Amplified Polymorphic DNA type (RAPD). The results showed that the analysis of genetic diversity within the population, using morph-physiological markers, revealed that the genetic similarities are varied between 0.291 and 0.479, with an average of 0.385. These values ​​reflect a high rate of polymorphism within the population analyzed. The physiological study resulted in 62.5% to 77.63% variation in the germination of the pollens and 83.3% to 67.1% in their coloration. Analysis of the molecular polymorphism showed that the 28 used primers were effectively generating 303 reproducible markers, of which 241 are polymorphic, with a polymorphism rate of 79%. The study of the genetic diversity demonstrated very high similarities (≥ 60%) between the populations analyzed, whereas small differences between these individuals occur. This study will pave the road to conduct the same work in other regions of the country. 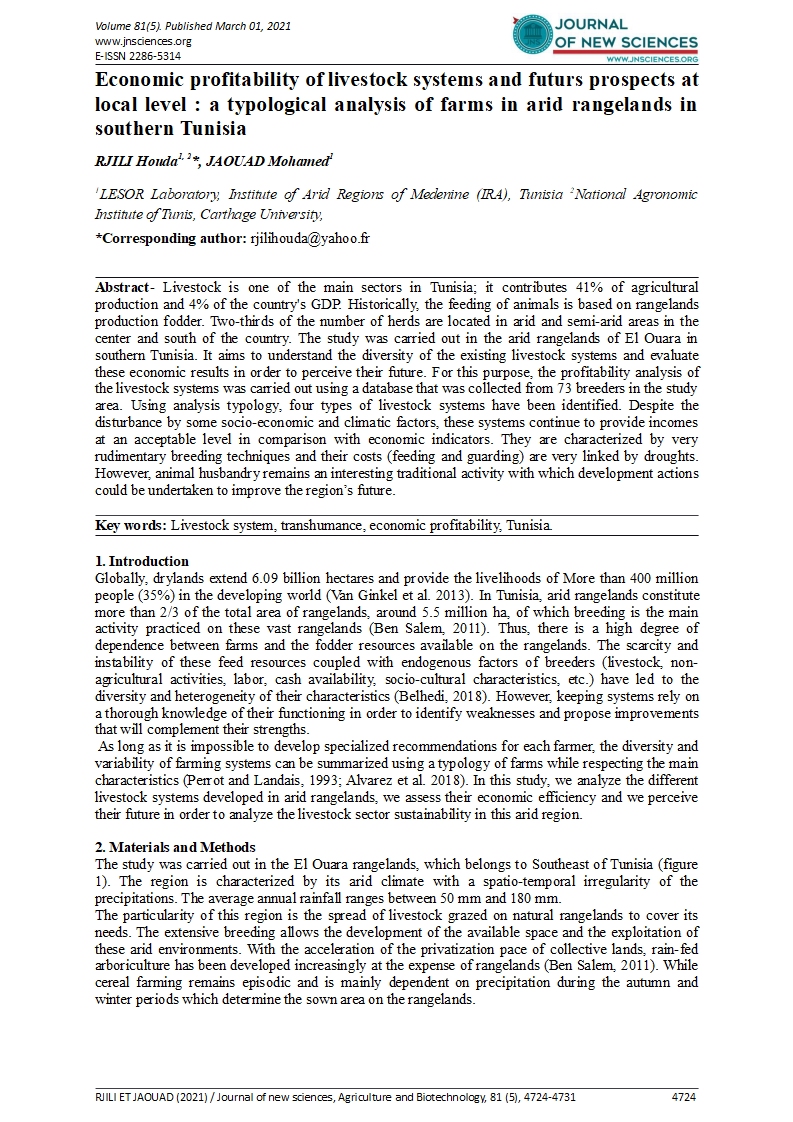 Abstract- Livestock is one of the main sectors in Tunisia; it contributes 41% of agricultural production and 4% of the country's GDP. Historically, the feeding of animals is based on rangelands production fodder. Two-thirds of the number of herds are located in arid and semi-arid areas in the center and south of the country. The study was carried out in the arid rangelands of El Ouara in southern Tunisia. It aims to understand the diversity of the existing livestock systems and evaluate these economic results in order to perceive their future. For this purpose, the profitability analysis of the livestock systems was carried out using a database that was collected from 73 breeders in the study area. Using analysis typology, four types of livestock systems have been identified. Despite the disturbance by some socio-economic and climatic factors, these systems continue to provide incomes at an acceptable level in comparison with economic indicators. They are characterized by very rudimentary breeding techniques and their costs (feeding and guarding) are very linked by droughts. However, animal husbandry remains an interesting traditional activity with which development actions could be undertaken to improve the region’s future. 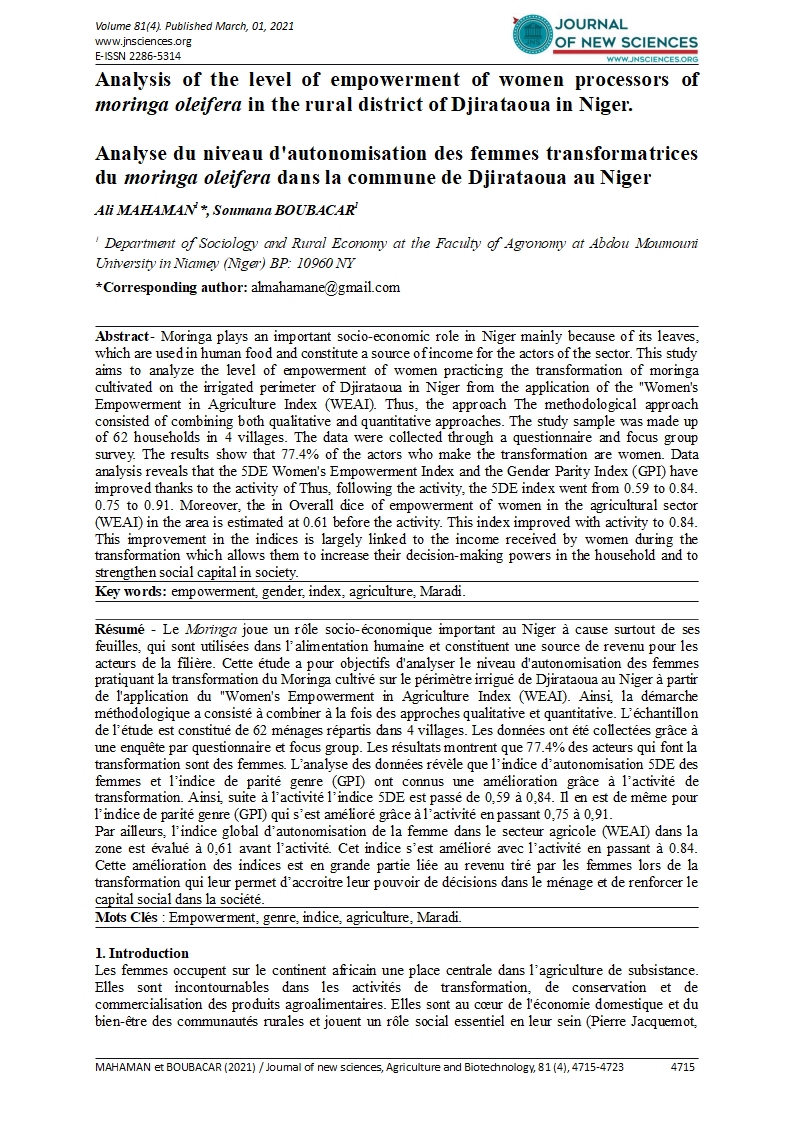 1 Department of Sociology and Rural Economy at the Faculty of Agronomy at Abdou Moumouni University in Niamey (Niger) BP: 10960 NY

Abstract- Moringa plays an important socio-economic role in Niger mainly because of its leaves, which are used in human food and constitute a source of income for the actors of the sector. This study aims to analyze the level of empowerment of women practicing the transformation of moringa cultivated on the irrigated perimeter of Djirataoua in Niger from the application of the "Women's Empowerment in Agriculture Index (WEAI). Thus, the approach The methodological approach consisted of combining both qualitative and quantitative approaches. The study sample was made up of 62 households in 4 villages. The data were collected through a questionnaire and focus group survey. The results show that 77.4% of the actors who make the transformation are women. Data analysis reveals that the 5DE Women's Empowerment Index and the Gender Parity Index (GPI) have improved thanks to the activity of Thus, following the activity, the 5DE index went from 0.59 to 0.84. 0.75 to 0.91. Moreover, the in Overall dice of empowerment of women in the agricultural sector (WEAI) in the area is estimated at 0.61 before the activity. This index improved with activity to 0.84. This improvement in the indices is largely linked to the income received by women during the transformation which allows them to increase their decision-making powers in the household and to strengthen social capital in society. 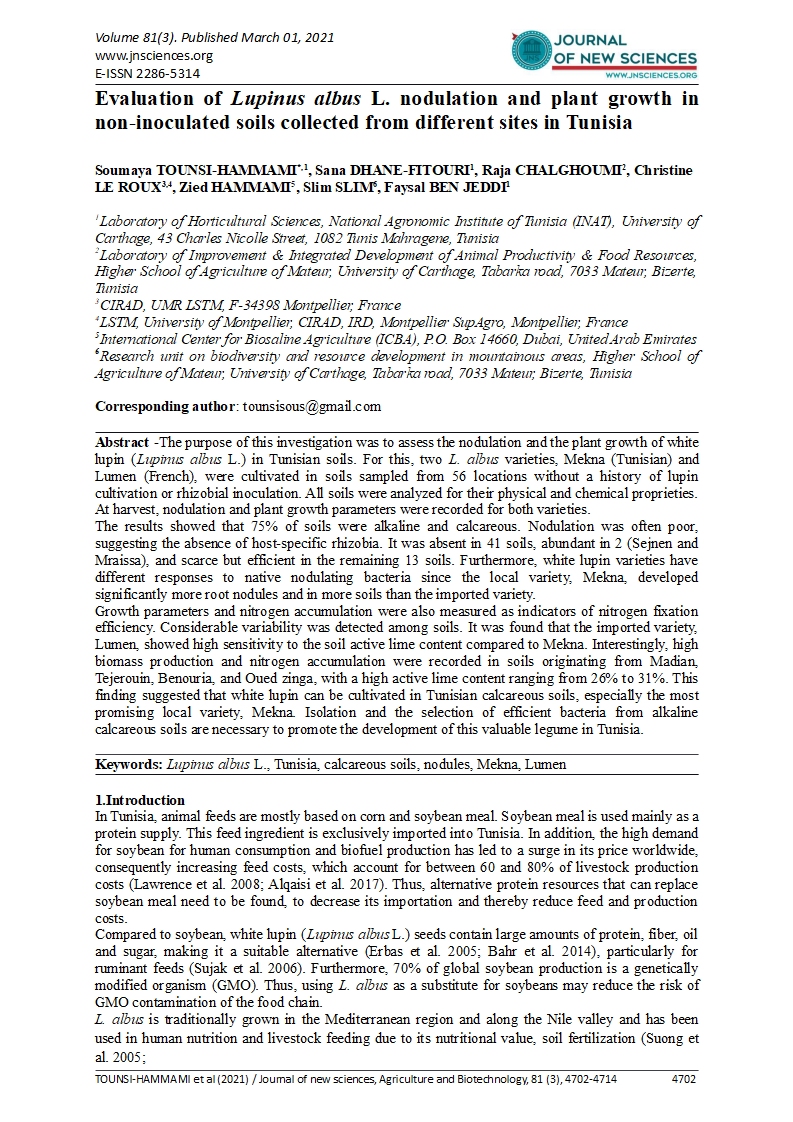 Abstract -The purpose of this investigation was to assess the nodulation and the plant growth of white lupin (Lupinus albus L.) in Tunisian soils. For this, two L. albus varieties, Mekna (Tunisian) and Lumen (French), were cultivated in soils sampled from 56 locations without a history of lupin cultivation or rhizobial inoculation. All soils were analyzed for their physical and chemical proprieties. At harvest, nodulation and plant growth parameters were recorded for both varieties. The results showed that 75% of soils were alkaline and calcareous. Nodulation was often poor, suggesting the absence of host-specific rhizobia. It was absent in 41 soils, abundant in 2 (Sejnen and Mraissa), and scarce but efficient in the remaining 13 soils. Furthermore, white lupin varieties have different responses to native nodulating bacteria since the local variety, Mekna, developed significantly more root nodules and in more soils than the imported variety. Growth parameters and nitrogen accumulation were also measured as indicators of nitrogen fixation efficiency. Considerable variability was detected among soils. It was found that the imported variety, Lumen, showed high sensitivity to the soil active lime content compared to Mekna. Interestingly, high biomass production and nitrogen accumulation were recorded in soils originating from Madian, Tejerouin, Benouria, and Oued zinga, with a high active lime content ranging from 26% to 31%. This finding suggested that white lupin can be cultivated in Tunisian calcareous soils, especially the most promising local variety, Mekna. Isolation and the selection of efficient bacteria from alkaline calcareous soils are necessary to promote the development of this valuable legume in Tunisia. 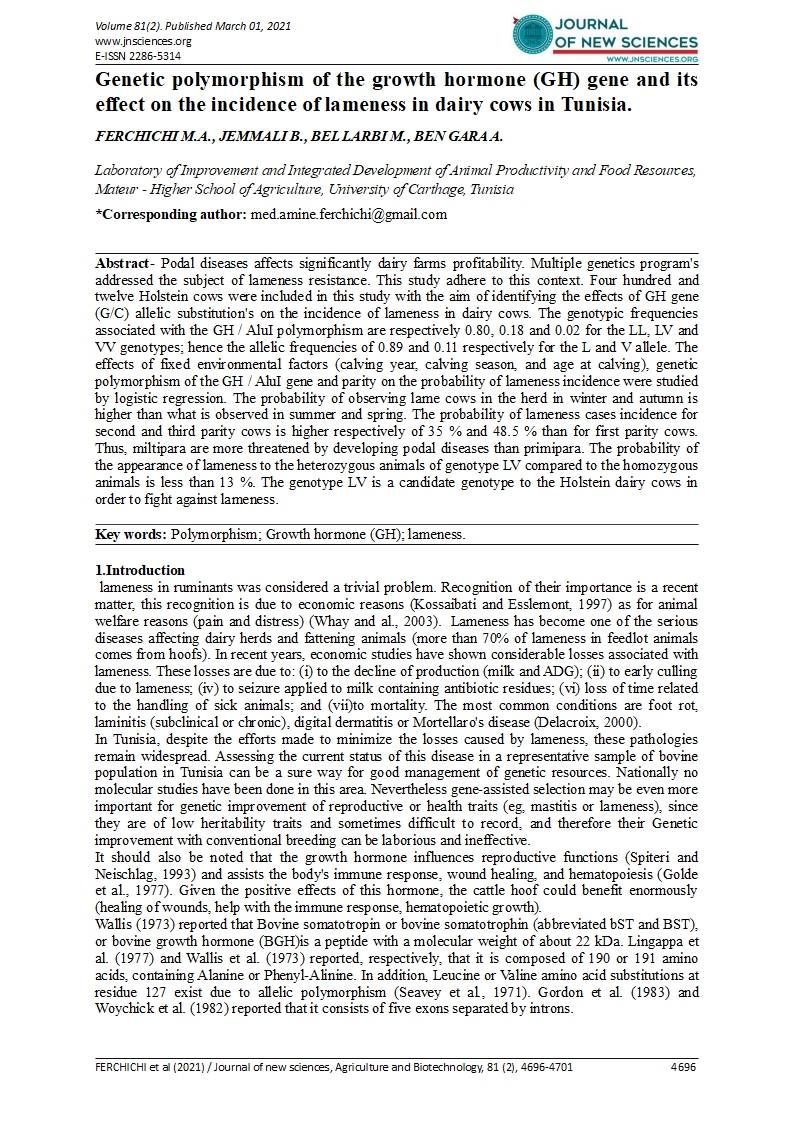 Abstract- Podal diseases affects significantly dairy farms profitability. Multiple genetics program's addressed the subject of lameness resistance. This study adhere to this context. Four hundred and twelve Holstein cows were included in this study with the aim of identifying the effects of GH gene (G/C) allelic substitution's on the incidence of lameness in dairy cows. The genotypic frequencies associated with the GH / AluI polymorphism are respectively 0.80, 0.18 and 0.02 for the LL, LV and VV genotypes; hence the allelic frequencies of 0.89 and 0.11 respectively for the L and V allele. The effects of fixed environmental factors (calving year, calving season, and age at calving), genetic polymorphism of the GH / AluI gene and parity on the probability of lameness incidence were studied by logistic regression. The probability of observing lame cows in the herd in winter and autumn is higher than what is observed in summer and spring. The probability of lameness cases incidence for second and third parity cows is higher respectively of 35 % and 48.5 % than for first parity cows. Thus, miltipara are more threatened by developing podal diseases than primipara. The probability of the appearance of lameness to the heterozygous animals of genotype LV compared to the homozygous animals is less than 13 %. The genotype LV is a candidate genotype to the Holstein dairy cows in order to fight against lameness. 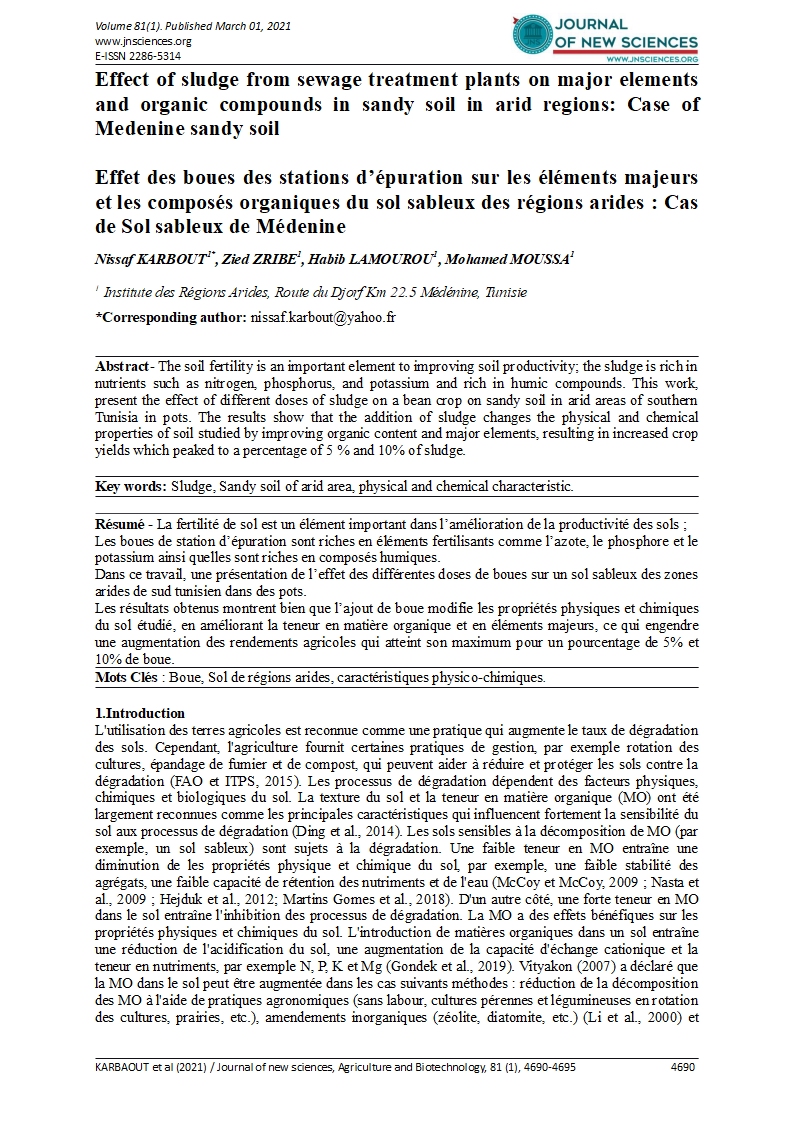 Abstract- The soil fertility is an important element to improving soil productivity; the sludge is rich in nutrients such as nitrogen, phosphorus, and potassium and rich in humic compounds. This work, present the effect of different doses of sludge on a bean crop on sandy soil in arid areas of southern Tunisia in pots. The results show that the addition of sludge changes the physical and chemical properties of soil studied by improving organic content and major elements, resulting in increased crop yields which peaked to a percentage of 5 % and 10% of sludge.